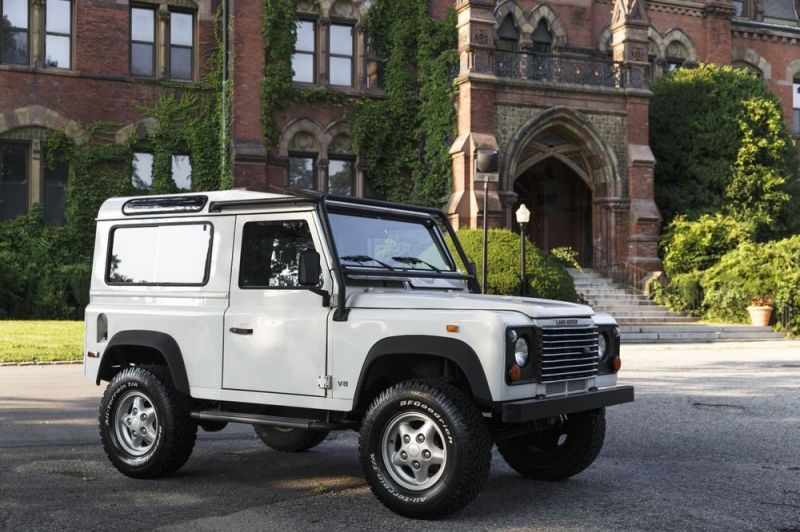 If you have any questions feel free to email: zoilacredo@net-c.es .

This is a 1997 Land Rover D90 - Alpine White - Station Wagon No. 533
This 1997 Defender 90 is in excellent running and physical condition. It has very low miles, is super clean and has
been a Garage Queen.
Never off-road.
I've driven this vehicle half way across the US and found it to be a comfortable ride all the way. It's so
enjoyable to drive and there is nothing else like it. If you aren't already an enthusiast, once you've owned one,
you'll never be the same.
When you see this vehicle up close you'll be surprised by the nearly flawless, rust free, condition inside and out.
Please look closely at the pictures and you will see how amazing this truck really is. It is extremely clean and
well cared for.
The ride is very smooth and quite for a vehicle of this type. No rattles, no squeaks.
The external cage, front bumper and rear cross member are all healthy, no rot.
This is a stock vehicle, with factory installed (not dealer installed) A/C and power windows.
It is in impeccable condition and has some nice additions including:
Shocks and Springs (July 2017) - Old Man EMU
Wheel spacers (July 2017) - TerraFirma
BOSS Audio Systems Bluetooth Stereo w/DVD/MP3/CD AM/FM Receiver
POLK Audio Speakers (4)
Rockford Fosgate 300 watt Sub-woofer
iPhone cable installed in dash for easy charging (no cut outs or modification to vehicle)
The Sub-woofer is held in place by a 2 inch piece of PVC tubing. It is quickly removable to allow for added cargo
space.
Tires are BFGoodrich All-Terrain T/A 265/75 R16 with lots of miles left in them.
CLEAN TITLE - no security interest or leans