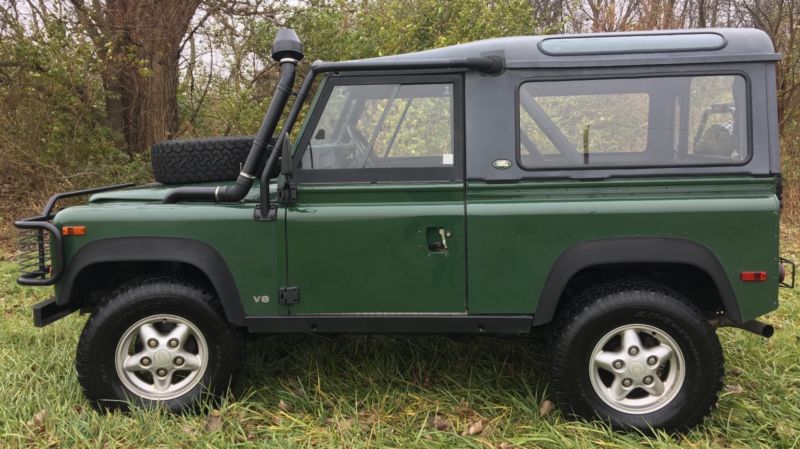 For consideration is a superb 1995 Land Rover Defender 90 in Coniston Green (chassis 2129). I am the second private
owner of this vehicle - I purchased it in 2003 from the first private owner after returning from Iraq. It was sold
to me from a couple from Denver, CO and my understanding is the wife received the vehicle as a gift from her
father. They were very nice folks who treated me well and sold me a great vehicle. I would very much like to do the
same.
I have meticulously maintained this vehicle for the past 13 years using it mostly while home on leave. When I was
away it was in climate-controlled storage and looked after by my (very) meticulous father. Since purchasing the
vehicle I have made a significant number of upgrades and added some of the most desirable accessories. In 2012 she
underwent a significant "service life extension" for use during my wedding. The work was done by a professional
body shop specializing in unique and antique vehicles. Some of the major work included: cleaning/restoring the
paint to original condition, repainting all of the "black work" on the vehicle (roll bar, brush bar, tire carrier,
etc.), complete rhino-lining of the interior and a complete Ziebart undercoating for rust-proofing & noise
reduction. The vehicle has been very mechanically sound but I have replaced the: water pump, fuel pump, ignition
switch and master clutch cylinder. Only original Land Rover parts have been used (I gave Rovers North a lot of
business over the years). She also received a new Interstate battery in 2015. When I purchased the vehicle in
2003 she came with: original grey fiberglass top with alpine windows, a BestTop soft top (in excellent condition),
5 Tornado alloy rims and a wrap-around brush bar.
This vehicle includes all of that plus the following extensive list of upgrades and accessories:
- NRP Stainless Steel Performance Exhaust System (center muffler silencer, tailpipe, all stainless steel hanger &
hardware). This was added in 2012.
- 6 new BF Goodrich All Terrain Tires...4 on the vehicle plus 1 on the rear tire carrier and 1 on the hood. There
are 5 Tornado rims plus one "NATO" military rim (mounted on the hood).
- Metal grill from Rovers North to replace the original plastic grill. I purchased a radiator muff at the same
time.
- Hood (aka 'bonnet') spare tire mount. This tire has a flat black NATO-style military rim.
- Black diamond plate on hood under the spare tire mount.
- NAS V8 raised air intake (Rovers North)
- "Arctic Wolf" air intake courtesy of the UK armed forces.
- I also have the original "flat" air intakes plus 1 additional winter (hooded) air intake.
- Spare tire covers for both the front and rear spare tires (these are brand new).
- High Lift Jack 48" - XT485 with off road base and neoprene cover (all brand new)
- Rear tire carrier mount for 1 "jerry can" and the jack. Fuel can is new - never used. The mount is included but
not yet pictured (or mounted).
- Original driver and passenger door hinges were replaced with stainless steel hinge set from Rovers
North...instead of painting them a matching color I decided to have them (professionally) painted black by the shop
that did my 2012 upgrade. The black matches the other "black work" on the vehicle and gives a nice contrast on the
doors.
- Alpine Stereo (the original quit and needed to be replaced).
- Mantec rock sliders (made in the UK and purchased from Rovers North).
- Stainless steel sill guards (purchased through Atlantic British).
- Stainless steel gas tank shield - needed to replace the rusting metal straps and went with the best Rovers North
had...
- Numerous misc. parts included: fuses & relays, convex mirror, nylon seat covers, bulbs, etc.
Floor mats are not pictured as I have just ordered a new set from Rovers North. The replacement mats I purchased 12
years ago are now in need...of replacement.
The vehicle is not rigged with a wire harness for towing; something I always meant to do but never got around to
doing. Bottomline is this vehicle has never, ever towed anything.
Off-road use...I must confess she has seen almost no off-road use while in my possession. She has spent the
majority of her time on rural roads in Illinois with trips to Michigan (the last being my wedding in 2012). She has
not seen any heavy duty off-road play.
While she has Montana plates and is titled in Montana she has never been...I borrowed a friend's address to title
in Montana instead of Illinois for (a) expense and (b) Montana plates look better. Plates were just renewed and are
good until October 2017.
This list is as inclusive as I can make it at the moment - I will make updates as needed. I understand the milage
is higher than some vehicles listed here but this vehicle is truly well maintained and in outstanding condition. I
will answer any questions you have and will also entertain reasonable offers. Thanks for looking and if you have
any questions please feel free to contact me. I understand this is a big purchase and I want this gal to find a
good home. She has been very good to me over the years and I want her to find the right home.
I also encourage reasonable offers using the "make an offer" feature. Thanks for looking!