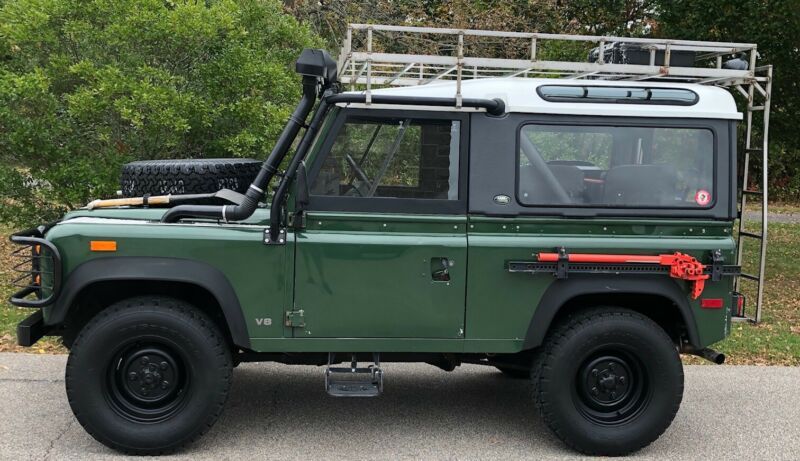 Powered by a 3.9L V8, its throaty growl is provided by a NRP Stainless Steel Performance Exhaust. The balance of the drivetrain shows the upgraded R380 transmission and a LT230 transfer case. It has always been garage kept and serviced yearly.

To highlight the upgrades, it equipped with a front skid plate, bonnet and wing checker plate, shovel, pick, 2 Hella
spots on front bumper, Mantec snorkel, 4 Hella spotlights on the roll bar, Brownchurch Rack, 2 rear Hella
Spotlights, Hi-Lift jack, Pelican box (contains tire repair kit, siphon, and jack accessories) and a fuel tank
guard. The truck is mounted with the removable fiberglass hard top since new and has never been removed. This
highly sought after top is in excellent condition with no visible cracks or damage.

The interior is classic Land Rover Defender, finished in grey/black, and does not show its age. It has a locking
center cubby with radio mounted. Four tilt up seats, with belts, are mounted in the rear bringing seating to 6. A
non-smoker vehicle, the truck has new Genuine Land Rover floor mats and transmission tunnel cover.

The chassis is in excellent condition as is the rear cross member and NAS rear step.

The bulkhead is in excellent condition. The ubiquitous seam on foot wells replaced with Rovers North pieces.