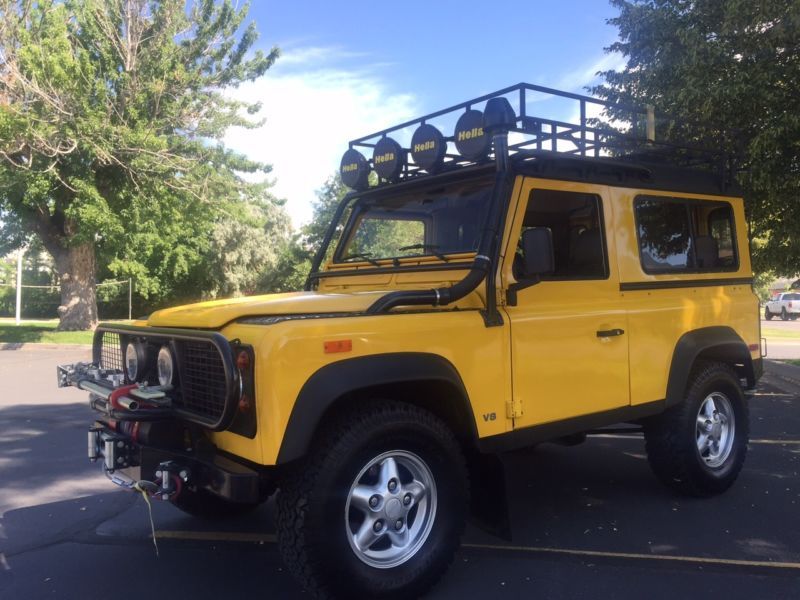 Limited production 1994 NAS Defender 90, 1 of 65 "Port Edition" models. Port Edition applied to the last 65 units
shipped into North America after Land Rover fielded complaints about how base the 1994 model was. The "PE" models
were custom fitted at the Port with a body colored Fiberglass Hard Top, AC, and a rear bench seat. I have since
removed the bench and added the "wagon" rear facing seats making the vehicle a 6 passenger.
This Defender stands out in a crowd - yet dressed to impress. Not too overdone, uniquely different than the rest
and as a Defender driver that is what we all look for, A timeless classic!
Upgrades:
Camel Trophy Brush Bar
Husky 10,000lb Winch w/ Controller
High Jack Mounted above Winch
4 BFG 265 75 R16 T/A KO's w/ less than 3k on them
Hella Lights on Bumper
Snorkel
White Roof Wrapped in Black Carbon Fiber (reduces heat significantly on the inside and looks good)
Rocker Panels wrapped in Black Carbon Fiber
Black Diamond Plating on Front Fenders and Rear Corners
Fiberglass LR Remove-able Roof with Rear Sliding Half Windows.
Full Wagon Doors with Roll Up Windows
Roof Rack w/ Hella Lights and Mount for Ax and Shovel (both Included but not pictured)
Rear Roof Rack Ladder
Off Road CB Antenna and Receiver
Fire Extinguisher mounted behind driver
Magnaflow Exhaust
Wagonlike Rear Facing Jump Seats (Exmoor Trim) - making it a 6 passenger
Leather Upgraded Front Seats (Exmoor Trim)
Front Seats Track Extensions (allows the front seats to fit taller people, I'm 6'5")
Lockable Center Box
Electrical Power Disconnect
Kenwood AM/FM USB Stereo
AC is installed but inoperable
This Defender looks and drives GREAT. Recently had it in Moab, UT and completed most notably, Hells Revenge;
without much of a challenge. Put it in low range and let it do its thing, simply amazing off-road prowess and
finesse.
For further information or questions please feel free to contact me as needed. Additional pictures are also
available.