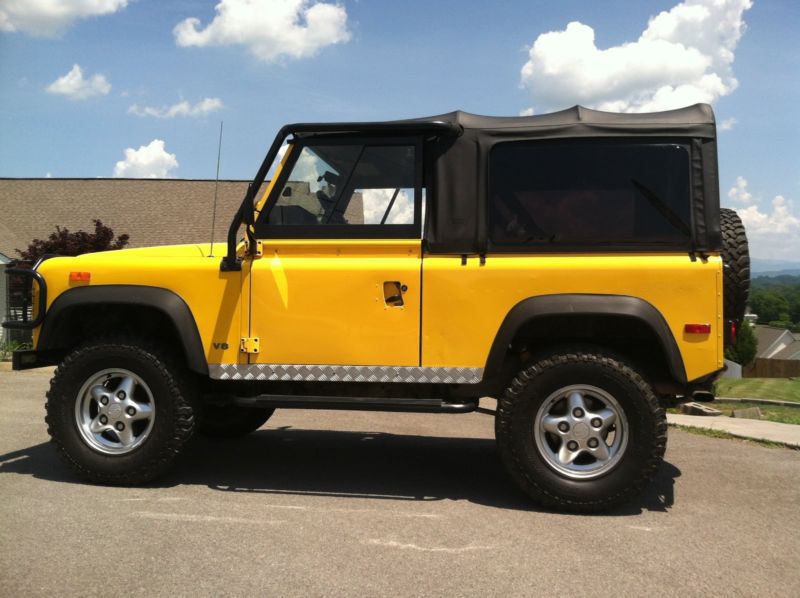 Back up for sale (buyer failed to contact me after accepting his/her offer) is a beautiful, well maintained, AA
Yellow 1994 North American Spec (NAS) Land Rover Defender 90. Only 7,500 NAS D90’s were officially imported
(1994, 1995, and 1997), which makes them a highly sought after and iconic 4-wheel drive vehicle. This is a fun
vehicle, an impressive machine, and a piece of off-road history.
1994 Land Rover Defender, #1615
~124,000 miles (114K on the odometer, which was replaced after 10K miles)
3.9L V8 engine, 5 speed manual transmission, 4 wheel drive with center differential lock (not axle lockers)
Owned & self-maintained since 2008 – I’ve put less than 15K miles on it
Runs & drives great
Garage kept since I have owned it
AA Yellow Exterior – good shape for a 20+ year old vehicle- not perfect, but she cleans up nicely
Interior is clean and in good shape for age – front seats recently reupholstered with new foam and seat
skins. Rear seat skin recently repaired (picture prior to repair)
Minimal rust – rust is mainly on bolt on components (side steps, fuel tank guard, spare tire holder, trailer
hitch receiver)
Old Man Emu medium duty suspension (~1.5” lift)
Front & rear sway bar quick disconnects
Soft top replaced with OE top (Bestop)
Vehicle is in great shape for 20+ year old rig, but it is a used vehicle, and therefore it is being sold as-is,
with no implied warranty or guarantees
$48,500, or best offer. Serious inquiries only. I have the title in hand and prefer to do business in person,