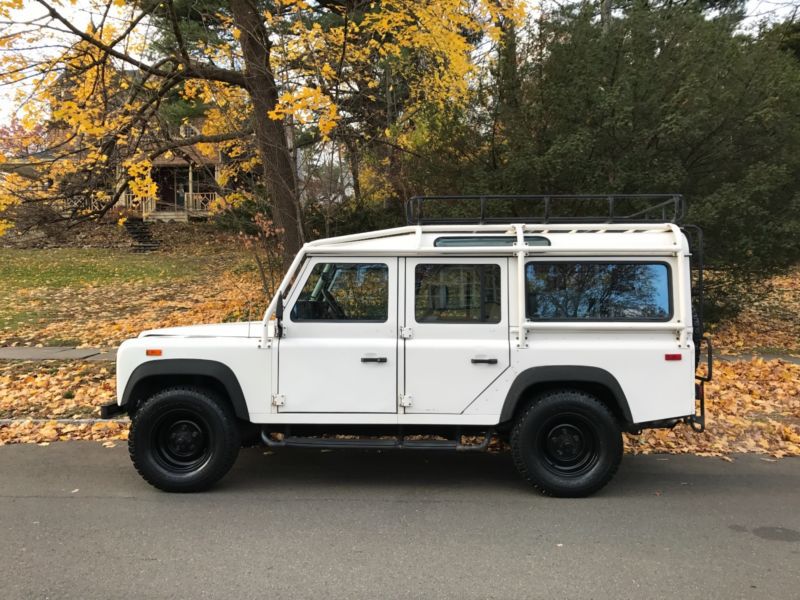 For more pictures email at: nidianhhalseth@f1fans.net .

1993 North American Specification (NAS) Defender 110, plaque number 198 of 500.
VIN SALDH128XPA919990
I am the second owner of this vehicle, having acquired it in 2013 from the original owner. When I began searching
for a NAS 110, I did so with the knowledge I’d gained as the owner of a 1997 Defender 90. I understood exactly
what I wanted, and had the following requirements: little to no rust, as close to original condition as possible,
well cared for with supporting service documentation, and a clean title confirming the history and stated mileage.
I spent over a year searching for one, flew out to personally inspect multiple NAS 110’s throughout the country,
and spent thousands on pre-purchase inspections, before discovering this vehicle at a ranch in Texas which checked
off all of my requirements. Since then, I’ve continued to care for this vehicle, truly appreciating just how few
of these are left in this near-original, un-molested condition.
Today, the truck has approximately 72,500 miles, and presents itself as a vehicle that has been used sparingly
throughout its life. That said, it will be turning 25 years old next year, and reasonable expectations should be
applied.
I have included the attached photos which I believe honestly depict the vehicle in its current condition, but I
have listed some items of note as you look through them:
-The original ANR1534 white steel wheels have been professionally refinished in black, with new tires recently
mounted
-The original radio has been replaced with an Alpine hands-free head unit, but the original is included
-The original headlights have been replaced with Truck-Lite LEDs, but the originals are included for replacement at
the buyer’s discretion
-The original LT77 gearbox was replaced with the R380 as part of an elective service from Land Rover N.A., which
still shifts smoothly today
-Braided stainless steel oil cooler lines have been fitted to replace the original rubber ones
-I have taken steps to ensure that the rust-free chassis and bulkhead would remain as such, but the running boards
could use either refinishing or replacement
-Interior including the dash and seats are close to perfect
-The passenger door could use either re-skinning or replacement in the future
-Headliner is sagging a bit in places
Additional original accessories included but not pictured include:
-Land Rover winch bag and leather gloves
-NAS 110 workshop manual
-Original window sticker
-NAS 110 owner’s manual