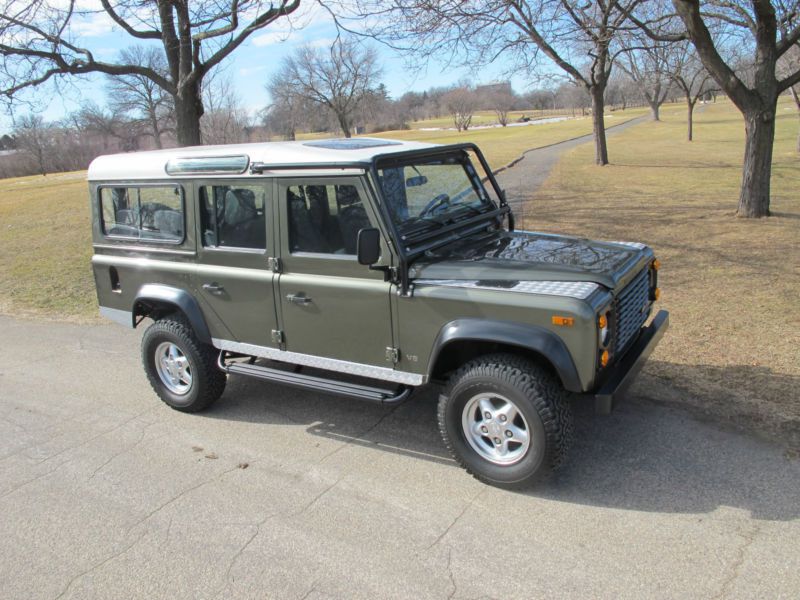 1997 Willow Green Land Rover Defender 110 Station Wagon model.
This one of only 300 Limited Editions ever made and the only one that I know of that was converted to a 110. This
is a nice, clean, well-optioned Defender 90 that runs and drives as good as it looks. You will notice that this
vehicle has been well cared for and shows little to no signs of rust (thanks to its life in Califorina). The
CARFAX report is clean and shows this to be a two owner Defender with no accidents.
This vehicle was born #124 of only 300 Willow Green Defender 90's ever made. It was originally sold to a customer
in California and driven about 60,000 miles before the owner decided to convert this vehicle to a Defender 110.
The conversion was done by a shop in Northern California and everything was done to a very high standard.
Options include; 4.0L V-8 Engine, ZF Automatic transmission, Air Conditioning, 16" Factory Alloy Wheels, 265/75 R16
BF Goodrich Radial All Terrain tires, 6-piece diamond plating, LED lighting (front and rear), Power windows, power
door locks, Keyless entry, Side running steps, (9) passenger Vinyl seating, JVC AM/ FM/ CD player stereo system,
(6) POLK Audio marine Grade Speakers, Exmoor carpet kit, Land Rover rubber matting (front and rear), and more!
The interior is in great condition.
This Defender drives extremely well.
The automatic transmission shifts smoothly through all gears.