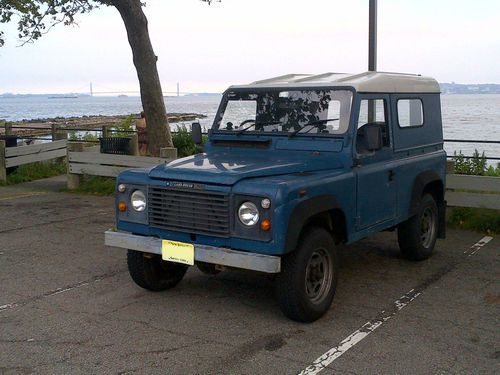 Condition: UsedA vehicle is considered used if it has been registered and issued a title. Used vehicles have had at least one previous owner. The condition of the exterior, interior and engine can vary depending on the vehicle's history. See the seller's listing for full details and description of any imperfections.Seller Notes:"Exactly how a 27 year old Land Rover should look"

Straight and original 1986 Land Rover 90. Runs and drives great. Imported from the UK earlier this year I have been using it as my daily driver here in New Jersey. This vehicle is RHD. 5 speed manual transmission with permanent 4 wheel drive, it has coil spring suspension. Cruises comfortably at 65mph. Clean New Jersey Title.
Although certainly not being a 'Show Queen' this Land Rover looks exactly as a straight and original 27 Year Old Defender should. The aluminium body shows some surface corrosion, dents and scratches, and over the years it has been repainted in a couple of places. The van body has had a window installed in the LHS, possibly when the vehicle was new. The interior is in good condition and everything works. There are 3 seats across the front and 2 inwards facing bench seats in the rear. The vehicle is standard, as it left the factory having never had any modifications.
The chassis is original and in good condition.
Mechanically this Land Rover is in good condition and has been well maintained. The 2.5 litre, 4 cylinder petrol engine runs smoothly and pulls strongly. The 5 speed manual gearbox shifts smoothly and is quiet. The transfer box is in good condition with both Low Range, High Range and Differential locking working well. The front and rear differentials make no noise. Within the last 3 years the Land Rover has had a new alternator, weber carburetor, radiator and thermostat.
The suspension and steering is in good condition. The ball joints and bushings appear to have always been replaced when they have worn and currently everything is in good working order. The steering tracks straight and true. Although the steering isn't power assisted it has 'finger tip' lightness once up and running. The Land Rover has Land Rover Discovery wheels fitted, the tyres are in reasonable condition, including the spare mounted on the rear door.
All the electrics work. New LHD headlamps were fitted earlier this year. The battery is strong, always starting first time despite being left regularly for 2 weeks or more in the airport car park.
Note: UK Vin was not recognised by ebay. Vin number shown is a random Range Rover Classic Vin.