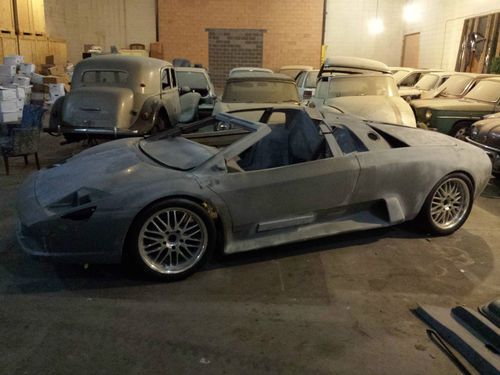 Condition: New: A vehicle is considered new if it is purchased directly from a new car franchise dealer and has not yet been registered and issued a title. New vehicles are covered by a manufacturer's new car warranty and are sold with a window sticker (also known as a “Monroney Sticker”) and a Manufacturer's Statement of Origin. These vehicles have been driven only for demonstration purposes and should be in excellent running condition with a pristine interior and exterior. See the seller's listing for full details.  ...
I started building this car about two years ago. I have worked many years restoring classics and building race cars for profit. When I started this project, I had planned on using a Fiero chassis. After buying a used 1989 Fiero and beginning to chop it up, I came to the conclusion that it was a crappy way to go. So, I scrapped it entirely. I had bought the fiberglass body, and had it sitting there, so I decided to use my experience and help from other industry friends, and began constructing and tubular chassis. It turned out great, I used 1" and 2" steel tubing for all the framework. Then, to save on weight, I constructed all the panels with 18 gauge aluminum. Then I decided to go a little further and make the cockpit as quiet as possible. So I put double panels with insulation. On each side of the frame surrounding the cockpit is a layer of 18 gauge aluminum with several inches of insulation between them. The front suspension is a mustang II style coil over system. It is fully adjustable. The rear suspension is a five link custom built configuration with a coil over system and a rear control arm. I had planned on using a LS9 Corvette engine, and a Porsche G50/50 transaxle. I built the engine bay to accommodate. It is VERY large indeed. However you could choose any smaller configuration if you wanted. I also decided I could make the rear end of the car look a little better than factory so I redesigned and fabricated the rear panels including the rear bumper, and deck lid. This is a kit car and there is still a lot to be done, however the hardest parts are complete. The buyer of this project should know how to build cars or be willing to hire someone to build it for them. The wheels are Porsche racing rims from Victor Equipment Rims and the tires are all Nitto NT 01 315/35/zr18. They are absolutely huge! Included are a few extras like the power rack and pinion, steering column, Wilwood four piston super light forged brake calipers, pedal assembly, and a few others. I'm willing to crate the entire car and ship via common carrier at whatever the shipping costs are plus $500 for crating and packaging. Things to be done are drivetrain installation, final bodywork, trunk and engine bay panelling and details, door mounting, glass and interior. The interior body panels are included and will need upholstery. The pictures of this project are of the car as it sits right now. What you see is what you get. The reason I'm selling this is because of two things. First is I don't have the time in my daily life to finish it. It's taken countless hours to get it to this stage and with my new family and work, I just don't have the time. Secondly is I'm moving this October to another country and really don't want to take it with me or pay for storage. If you have any questions, you can call me direct at 540-221-5826 but please read this description before calling me. The car is located near Winchester VA. The body alone cost $4500, tires were $500 per tire, wheels were nearly $2000, and I lost track of all the other expenses. The doors on the car are only temporarily attached right now for alignment purposes. They will require hinge installation and final alignments. This is a great find for someone who loves building cars and has the means.
I will accept cash, cashiers check, personal check (car is released once check clears), or major credit cards or debit cards through PayPal
Thank you and happy bidding!

Special editions have proven themselves a great way for high-end automakers to get a little bit more for their wares, but they appear to be gradually being taken over by personalization programs that allow customers to order their exotic new wheels just as they want them. After all, what's the point in ordering a special color scheme someone else has chosen when you can choose it yourself, with special wheels and interior upholstery to match?
Lamborghini has just such a program. It's called Ad Personam, and like the customization catalogs offered by other automakers, it allows its clients to specify any range of stylistic parameters to suit their own taste. To showcase the program, Lamborghini brought a customized Aventador to the Beijing Motor Show. Called the Nazionale edition, it's got a white paintjob with tricolore racing stripes up the hood, anthracite wheels, and a blue leather interior.
It's similar to the Gallardo Tricolore that rolled out of Sant'Agata three years ago - the kind of treatment we'd otherwise call a special edition, but despite carrying a different name, it just goes to show the possibilities Lamborghini offers it customers. For the right price, of course.

Coachbuilt Italian Finery Rides High In The Mediterranean
Apparently, the appropriate gift to give for the 45th anniversary of almost anything is a blue sapphire stone. I cannot imagine Autoblog readers craving a story about that, so I'm glad that Italdesign Giugiaro spared me that gig and instead created this truly interesting Parcour concept to mark its 45th anniversary.
Parcour is named after the generally urban activity of French origin (spelled "parkour"), of throwing one's (presumably) agile body off walls and railings in an anti-gravity freestyle momentum ballet. This sometimes ends up being broadcast on YouTube, particularly to show a parkour session gone horribly wrong, with the star taking a metal banister in the cojones or receiving a fetching bouquet of twisted fingers. Clearly design boss at Giugiaro, Fabrizio Giugiaro (son of legend Giorgetto), and his squad had more coordinated good parkour-ing in mind when they let me drive their cool creation on the island of Sardinia. (I live not far away, so it's a one-hour flight with the herds on a low-cost airline.)