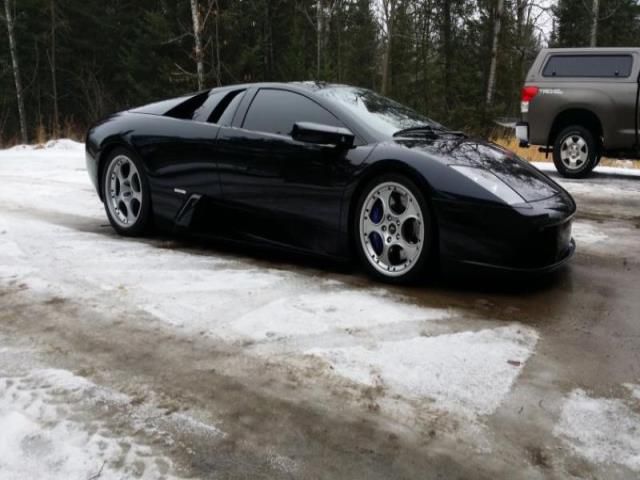 It currently has 36k miles. Nero Pegaso (Black) over Nero Alcantara interior. Rear Wheel Drive conversion. Full Fabspeed exhaust with secondary cat deletes, car sounds amazing! Books and MED Alarm codes and second key and fob. Very good service history with over 20 pages of receipts including just having the valve adjustment completed along with all new plugs. Clutch has been replaced approximately 7500 miles ago and feels very good. No slipping what so ever. Car underwent PPI just 600 miles ago including compression test and shows excellent numbers. DynoJet dyno made 475 RWHP & 425 RWTQ. The engine is definitely strong and the numbers prove it. Alpine stereo system including amp and sub professionally installed as well as a Beltronics Radar/Laser/Jammer system integrated into the center console. Clear-Bra installed on the front bumper, hood and front fenders. Paint shows well but does have minor imperfections.

Words aren't needed in the company of an Espada

There's something about vintage Italian machinery. From the curvaceous lines of the Ferrari 250 GTO to the more exacting angles of the Lamborghini Espada, the cars hold the promise of something illicit. Something both scowling parents and stern-jawed law enforcement would thoroughly disapprove of if you happened to get caught in the act. It's one of the infinite reasons we love them, and the crew at Petrolicious have managed to capture that precipice of temptation on film.
CJ Bonura was kind enough to let the crew tag along during a little impromptu canyon run in his big silver Espada. The video eschews the typical owner interview in favor of more engine audio and an appropriate soundtrack. If the clip doesn't leave you wanting to jump into your own car for a quick sprint, we can't help you. Check it out in the video below, and stay tuned for more goodness from Petrolicious.

Think of Italian Formula One teams and Ferrari is first and foremost to come to mind. But the Prancing Horse team is not the only game in town. What is today known as Scuderia Toro Rosso was once, and for two decades, known as Minardi. And for one (unfortunately unsuccessful) season, it was powered by Lamborghini.
That season was 1992, when Christian Fittipaldi (Emerson's nephew) drove for the team, substituted by Alex Zanardi for a few races and teamed up with Gianni Morbidelli - the Italian driver who just took the Superstars championship this past weekend.
Alongside the Modena team it supplied the year before (to even less success), the Minardi partnership was one of only two Italian teams which the F1 division established at Lamborghini under Chrysler ownership would motivate power. It yielded a sixth-place finish at the Japanese Grand Prix as its best result, but the coupling of an Italian engine in an Italian chassis is what makes it stand out in history. Valentino Balboni drove it for demonstration events at Road Atlanta and Sebring, and now that car is up for auction on eBay Motors.

Lamborghini will give us a big clue as to the look and feel of the impending replacement for its Gallardo model at this September's Frankfurt Motor Show. According to a report by Autocar, the Italian supercar maker will have a concept car in Frankfurt that will preview a 2015 replacement for the current Gallardo (pictured above).
While nothing is set in stone, the word is that Lamborghini is still considering "Cabrera" as the Gallardo-successor's name. We didn't know the company had so many Tigers fans, but the Autoblog Detroit office is stoked.
The same report tells us that the new Lamborghini, currently going by the internal designation LP724, will be based on the same platform as the second-generation Audi R8, rather than on the more exotic Aventador underpinnings. That means a modular spaceframe, aluminum and carbon fiber construction and a reduction in curb weight as a result - the target is less than 3,300 pounds. Even with the diet, the next Gallardo will be slightly longer than the current car, but about the same height and width.