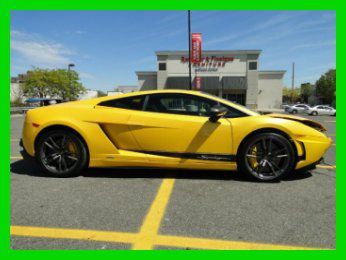 The last we heard about the Lamborghini Sesto Elemento, Lamborghini had confirmed its production with only 20 examples of the track-only car planned, but now we're finally starting to get some of the details about this knife-edged car. AutoVisie recently had the chance to talk to Maurizio Reggiani, Director of R&D at Lamborghini, who not only confirmed what will power the new car, he also said that the production version will carryover almost untouched from what we saw in concept form at the 2010 Paris Motor Show.
What we now know is that the Sesto Elemento will share the same powertrain as the Gallardo LP570-4 Superleggera including the 570-horsepower V10 and the all-wheel-drive system, and it will be built at a new factory dedicated to building prototypes and limited-volume cars like this. Also, the report states a curb weight of 2,200 pounds, a top speed of 320 kilometers per hour (198 miles per hour) and a 0-100 kph (0-62) time of just 2.5 seconds. The only changes made to bring the concept to production were to increase the car's rigidity and its safety. This means the car will still feature all-carbon-fiber construction and unique bucket seats that are actually built into the car's body; driver adjustments coming from the steering wheel and pedals.
The estimated price for the Sesto Elemento is two million euros, or around $2.6 million US, and although the original production date was slated for early 2013, Motor Authority now says that we'll have to wait for another "year or two" to see this car in the wild. Also, it does not appear that this is the mystery car recently teased in a 50th anniversary video released by Lamborghini.

Love it or hate it, the Lamborghini Veneno is an incredible - and incredibly rare - car. With Lamborghini committed to building just three examples of the Veneno, it's very likely that we'll only ever see this pre-production show car in our lifetime.
That doesn't mean we'll be any less excited about laying our eyes on this fine example of the world's most-expensive production car, which we recently did as the Veneno made its US debut at the Quail Motorsports Gathering. Now that we see it again, it might look even better under the California sun than it did the last time we saw it under the bright lights of the Geneva Motor Show. Now, if we could just find the keys...

Coachbuilt Italian Finery Rides High In The Mediterranean
Apparently, the appropriate gift to give for the 45th anniversary of almost anything is a blue sapphire stone. I cannot imagine Autoblog readers craving a story about that, so I'm glad that Italdesign Giugiaro spared me that gig and instead created this truly interesting Parcour concept to mark its 45th anniversary.
Parcour is named after the generally urban activity of French origin (spelled "parkour"), of throwing one's (presumably) agile body off walls and railings in an anti-gravity freestyle momentum ballet. This sometimes ends up being broadcast on YouTube, particularly to show a parkour session gone horribly wrong, with the star taking a metal banister in the cojones or receiving a fetching bouquet of twisted fingers. Clearly design boss at Giugiaro, Fabrizio Giugiaro (son of legend Giorgetto), and his squad had more coordinated good parkour-ing in mind when they let me drive their cool creation on the island of Sardinia. (I live not far away, so it's a one-hour flight with the herds on a low-cost airline.)