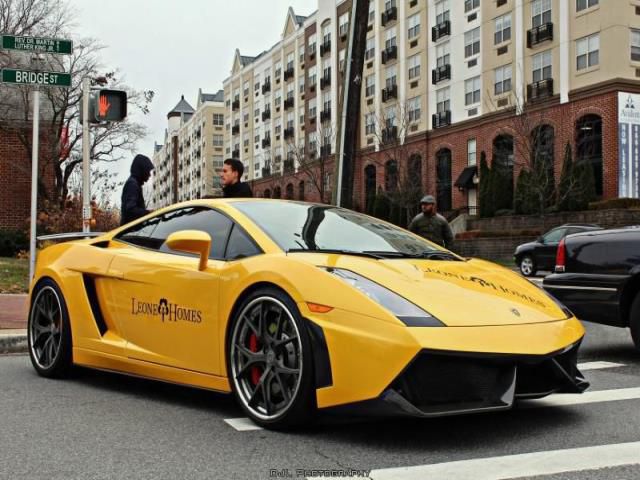 Up for sale is one of the most recognized Lamborghini Gallardos on the east coast…the Leone Homes “HotLambo”. This Gallardo was featured at the New York International Auto Show/DUB Show 2103, the Facebook homepage vehicle for HRE Performance Wheels, featured in a DMC Germany behind the scenes write up, rolled down 5th avenue in the Columbus Day Parade and was in numerous photo shoots/events in and around the tri-state area. There was no expense spared when bringing this Bull from mild to wild. Built by the reputable Martino Auto Concepts, only the best of the best aftermarket components were used in the creation of HotLambo. With only 8,863 miles, this yellow and black 2005 Lamborghini Gallardo is ready to find its new home. It has a clean car fax and the oil was changed last at the 8,000 mile mark. HotLambo boats: · 20inch HRE P101 Performance Wheels finished in satin charcoal with polished step lips· Michelin Pilot Super Sport Tires - 245/30zr20’s up front and 325/25zr20’s in the rear· DMC Tuning 570 full carbon fiber front bumper· DMC Tuning carbon fiber rear wing· Carbon fiber side skirts· OEM head unit with navigation and rear camera· Renown Auto Style complete rear end upgrade (2009 – LP560)· Custom finished calipers· Custom finished air intakes (twinkies)· Carbon fiber steering wheel· Clear engine bonnet· 3M Paint Protection Film (full hood, front and rear bumpers, fenders and partial quarter panels) There is nothing that was overlooked in creating this Bull. The work performed was done meticulously and it shows. Serious inquiries only… Please bid with confidence as my 100% positive feedback speaks for itself. This vehicle is being advertised locally and the seller reserves the right to end the auction at any time. Please ask all questions prior to bidding as all sales are final. Additional pictures and information can be found on the Exotics4Life site. This vehicle is being sold in “as is” condition.

With all the versions of the Gallardo that Lamborghini made over the course of that model's dozen year lifecycle, we knew the debut of the new Huracán would only be the start. And now we're getting an idea of what Sant'Agata has in store. Before too long, there'll be a new Spyder, and likely a rear-drive version as well. But racing teams are more eagerly anticipating the new competition versions. There's the new Super Trofeo spec racer that Lambo unveiled in Monterey a couple of weeks ago, but now we're receiving word of a new GT3 racer as well.
Based closely on the Super Trofeo, the Huracán GT3 is reportedly being designed to meet the regulations of numerous racing series - including, the latest reports will have us know, the United SportsCar Championship that competes in North America. This according to Sportscar365.com, which spoke to Lamborghini's chief test driver Giorgio Sanna at Virginia International Raceway recently.
Unlike some of its rivals, racing has not traditionally been a core value at Lamborghini, but it has competed here and there. It previously relied on Reiter Engineering to develop racing versions of the Murcielago and Gallardo, but is said to be doing the Huracán GT3 almost entirely in-house, with a modicum of input from Dallara, the racing chassis manufacturer founded by the man widely credited with developing the Miura and Espada in the 1960s.

With its razor-sharp wedge shape, high performance and minuscule ride height, the Lamborghini Countach has always been a supercar made to be gawked at and grab attention. Even the model's name supposedly comes from an Italian exclamation. But not all recognition is positive, as is the case with this Lamborghini illegally parked within sight of London's famed Tower Bridge.
According to The Telegraph, this white Countach was reportedly abandoned after running out of fuel, blocking a lane in the process. In that time, someone apparently attempted to scratch off part of its no-parking sticker. In the end, the supercar was hooked up and lifted onto a flatbed truck to be towed away, drawing a sizable crowd in the process. Those interviewed seemed pretty upset and mystified that someone would illegally park the car there.
According to The Telegraph, the owner was traced via license plate, whereupon it was discovered there was a warrant out for his arrest on harassment charges. He was subsequently arrested in London and later released on bail. Sadly, there's no word yet on whether the classic Lamborghini was released with its owner or if its angular self is sitting in an impound lockup somewhere.

The Urus SUV still hasn't received the official green light for production, but that hasn't stopped Lamborghini from protecting its performance crossover in the land of stolen vehicle designs. These patent drawings submitted in China show what appear to be the Urus in the same concept form that we first saw last year at the Beijing Motor Show.
Last we heard, the Volkswagen Group had put development of the Urus on hold even though, more recently, the Bentley EXP 9 F (aka, the Falcon) has reportedly been given the nod. Although the existence of these patent images don't necessarily mean the Urus is going into production, they are at least another excuse to debate the SUV's stealth-bomber-style lines.