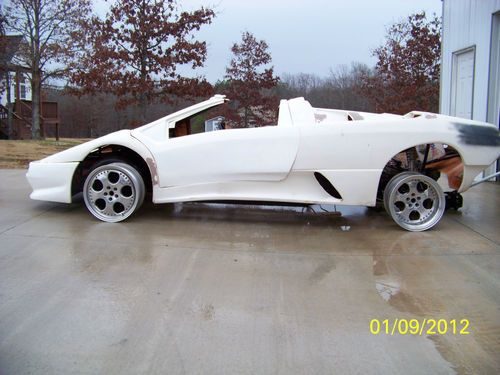 Car and Driver threw a leg over the Lamborghini Huracán and rode it hard all around the 16-turn Circuito Internationale Nardò, next to the banked oval that's brought us many a top-speed video. On the way to discovering the bull calf sweetly eclipses the Gallardo it replaces, CD also discovered that - comparing their own tests - it is faster from zero to 60 miles per hour than its paterfamilias, the Aventador.
Now, we should all know that 0-60 tests are an imprecise discipline, but CD's Eric Tingwall torched the sprint in the Huracán in 2.5 seconds - yes, faster than a whole lot of other very expensive super-coupes. In the magazine's last instrumented test of the Aventador Aaron Robinson ran 3.0 seconds, and for more Aventador perspective we can compare Motor Trend's 2.8 seconds, also scored at Nardo, Road & Track at 2.7 seconds and Lamborghini's estimated 0-62 mph time of 2.9 seconds. Any way you chop that up, 2.5 seconds beats it. A bit of a shock, then: Lamborghini lists the Huracán's 0-62 mph time as 3.2 seconds.
We'll get a more precise idea of the discrepancy when more tests come online, but for the moment - and in this one respect - we've got the $241,945, 602-horsepower Huracán showing its angry backside to the $397,500, 691-hp Aventador. Even if it remains true, though, we're not sure it matters; in a figurative case of Predator versus Alien, it's arguable that the only way to be wrong is not to own one.

The Gallardo was far and away Lamborghini's most successful model. Over the course of ten years, the Bolognese automaker sold some 14,000 of them. As the Gallardo has now reached the end of its production cycle, Lamborghini is hard at work developing its replacement, and these are the latest spy shots of the work in progress.
Now wearing swirly camouflage instead of the flat-black wrap spied on previous prototypes, this latest version is our best glimpse yet at the supercar expected to be called Cabrera. Despite the more disguising wrap, though, the contrast between bodywork and air vents is more evident - particularly between the side window and the rear wheel, where this prototype appears to be sporting a panel similar in appearance to the "side blade" on the Audi R8 (with whose replacement the Cabrera is expected to share much). However, this is more likely a bit of disguise to throw us off the scent. Don't be thrown by the headlamp treatment, either. It may look like a Photoshop product, but our photographers on the ground tell us these translucent screens are just another diversion - as if you couldn't tell this was a Lambo from a mile away.
As for technical details, we're still expecting a reworked version of the outgoing model's 5.2-liter V10 driving all four wheels, only retuned to the tune of 600 horsepower. A dual-clutch gearbox (similar to the excellent unit newly installed in the R8) is tipped to transmit the power instead of the six-speed manual or robotized gearboxes in the outgoing Gallardo or the rapid but unrefined ISR transmission in the Aventador. Expect weight to be trimmed thanks to Lamborghini's further experimentation with carbon fiber production techniques, helping the Cabrera do better than hold its own with newer, fresher competition like the Ferrari 458 Italia and McLaren 12C.