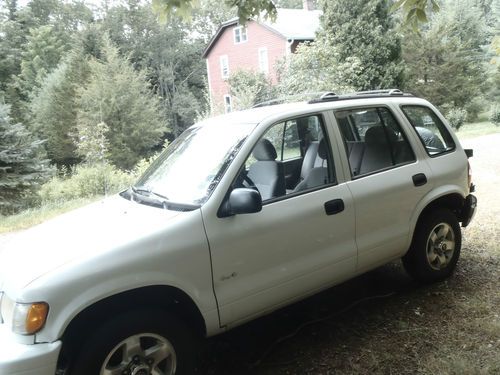 Condition: UsedA vehicle is considered used if it has been registered and issued a title. Used vehicles have had at least one previous owner. The condition of the exterior, interior and engine can vary depending on the vehicle's history. See the seller's listing for full details and description of any imperfections.Seller Notes:"Left rear bumper missing small piece from tire blow out (shown in photo), missing driver side sun-visor,"

2001 Kia Sportage 123K Does not currently run but is probably as easy fix for any mechanic. It stopped running and the mechanic told me it could be a whole transmission needed or just a simple timing belt. I don't have the $$ to play guessing games and the land lord wants it gone. I put 30k on it and it always drove great the tires are almost brand new and it had a tuneup shortly before it quit. It has been sitting but I keep the tires up and wash it regularly. Interior has no rips or stains and the exterior is good minus the back bumper where a blowout broke off a piece. Kelley Blue Book says $3800 in fair running condition so I adjusted the price since it isn't running. I need to get this sold but I'm not interested in scams or being low balled. Serious inquiries only please, will need to be hauled/towed away.Email is best communication

Kia's Second Effort At Luxury Finds More Love Than The Amanti
The same recent global economic crises that have led luxury automakers to invade the small car market are also somewhat responsible for the influx of near-luxury sedans from mainstream automakers. As the likes of Mercedes-Benz and Audi are reaching down for new customers, automakers like Hyundai, Chevrolet and Toyota are reaching up to bridge the gap and fill in the white space between the industry's typical high-volume large sedans and established luxury sedans. Joining this emerging market, the 2014 Kia Cadenza is the latest sedan to blur the line between value and luxury. One of Kia's core focuses has been offering value to customers, and even with a starting price of $35,100, the Cadenza still represents plenty of that kind of thinking.
Despite what might first come to mind, the Cadenza is not named after a piece of furniture. Instead, Kia notes the name for its new front-wheel-drive flagship comes from the Italian musical term that translates as 'cadence'. The name thus fits in nicely with the brand's other musically inspired model name, Forte. Much like the Hyundai Genesis, the Cadenza will serve as a test of sorts to see how much customers are willing to pay for a Kia, and despite recent reports indicating that Kia has confirmed the Quoris for next year, the reality is that the availability of the bigger rear-wheel-drive flagship will be determined in part by how well the Cadenza strikes a chord with buyers.