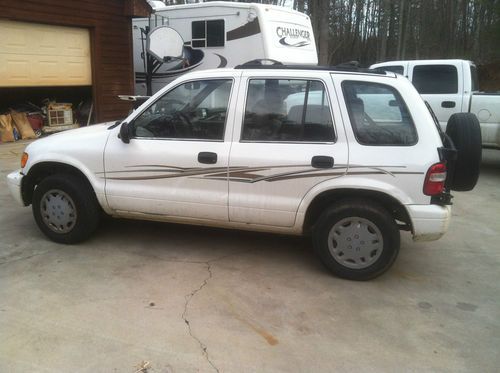 2000 Kia sportage 5spd manual 2wd.  engine runs good.  The transmission grinds a little when going into 4th gear, and the belt makes a screeching noise at 2500 rpm since I had it replaced, so that could use some adjusting.  Its not really pretty, but its been reliable.  All windows are free of cracks.  The seats and carpet are stained pretty bad.  Tires need to be replaced, and I just recently lost the gas cap.  does have some major dents which you can see in the photos.  the driver door was bent forward from a truck backing into it while the door was open, and now wont close.   Its has a clean NC title.  If you don't mind doing some body work.  this is a great way to get a good running vehicle for cheap.

The little machine you see above is the Kia Cub. The Cub first debuted at the Seoul Motor Show, but this is the first time we've been able to see it ourselves in person, so we pointed our camera lenses its way and got to snapping.
According to our men on the show floor, the Kia Cub Concept is "quite good looking," with a squat and funky shape that looks mostly ready for production. With a five-door hatchback shape featuring reverse-opening doors (we'll resist calling them suicide doors... whoops...), this machine doesn't seem to share much design DNA with current Kia products. And that's fine. As much as we like Kia's swoopy line of cars and 'utes, a little shakeup every now and then never hurts.
We're sure the diminutive hatchback would be a fun car to pilot, with 204 horsepower and 195 pound-feet of torque coming from its turbocharged and direct injected 1.6-liter four-cylinder engine. Kia quotes a 0-62 time of 7.7 seconds and a top speed of 143 miles per hour. Sounds to us like it could be a worthy competitor to such successful sporting hatchbacks as the Mini Cooper S and Fiat 500 Abarth.