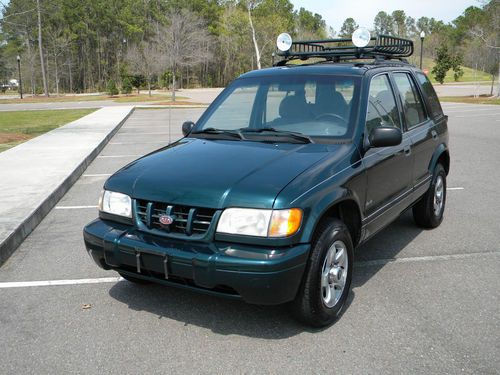 Hi, bought new car so selling this one on Ebay. Its a 1999 Kia Sportage 4x4, it jus went over 100k miles, new tires, new battery and starter in the last 3 months. Clean in and out, everything works like it should. The car as a very nice cargo carrier with 6 1/2 inch Hella lights, they work but are not hooked up.Please email with questions. The airport here is Charleston International if you are planing on flying in and driving home. Please have shipping in place before bidding. Thanks and good luck. The Kia is for sale locally so the auction may end earlier. Thanks

2014 Cadenza is Kia's take on the Hyundai Azera

No, this is not the oh-so pleasantly named Quoris rear-wheel-drive flagship sedan - this is Kia's new front-drive entry into the North American market, the Cadenza. (If that sounds familiar, it's because Kia has long used the Cadenza name in other markets.) And while it's a sharp-looking thing, it's not exactly an original masterpiece. Peel away that slick exterior and you'll find a trusty Hyundai Azera doing the grunt work.
That's no bad thing, though; the Azera's a smooth-sailing sedan. Under the hood is a 3.3-liter direct-injection V6 putting out 293 horsepower and 255 pound-feet of torque, mated to a six-speed automatic transmission with, oh yes, Sportmatic manual mode. That power hits the ground via a sport-tuned suspension with MacPherson struts up front and a multi-link rear configuration, matched with either 18- or 19-inch alloy wheels.
Inside, there's a whole host of nice leather surrounded by wood and chrome accents, with a driver-focused cockpit (sort of like the Optima) with a seven-inch TFT color touchscreen display. Premium options include things like Nappa leather seats, a panoramic sunroof, Kia's UVO infotainment system, HID headlamps with active lighting, heated seats and a heated steering wheel. Sounds comfy.