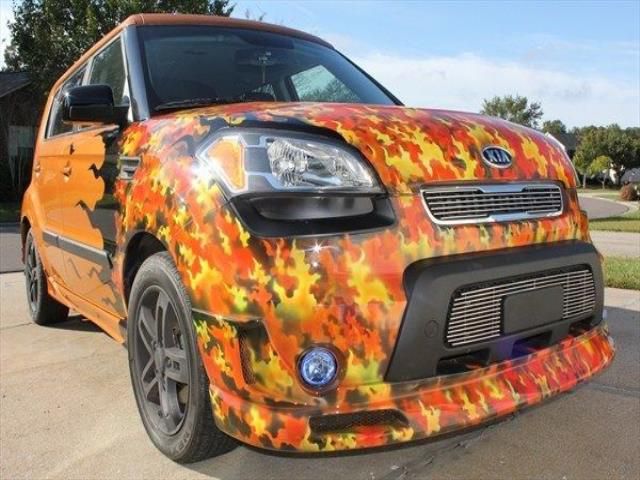 The machine you see above is, according to a report from Autocar, the Kia Provo Concept, and it's set to debut at the rapidly approaching Geneva Motor Show. As you can see, the Korean concept draws inspiration from young and hip hatchbacks like the Mini range and the Citroën DS3.
We can't say how much of the Provo's somewhat radical conceptual design will make it into production, such as the contrasting roof color, oversize wheel arches filled with some pretty radical wheels, and one-piece headlight and taillight housings. Suffice it to say, though, we're definitely intrigued by what we see.
Also note the diamond stitching in the interior with chrome, suede and carbon fiber accents. The flat-bottom steering wheel is also rather interesting. These details, along with the racy elements of the exterior design, make us think Kia may be targeting performance-minded buyers with the Provo.

Kia has been toying with the notion of an electric vehicle for years now. In the two years since the Korean automaker revealed the Ray EV concept, rumors of a battery-powered production vehicle have persisted, evidenced most recently by spy shots showing an electric version of the Soul hatchback this past July. Now Kia has officially announced that the Soul EV is heading for production.
Although Kia has yet to reveal official photos or specifications, this is the first confirmation we've received that the Soul EV is indeed headed for a showroom near you. Set to arrive sometime next year, the Soul EV promises to pack an as-yet unspecified arrangement of electric motors and batteries and visual cues that aim to improve the vehicle's aerodynamics and differentiate it from the conventionally powered Soul.
We'll have to wait until its debut approaches at an undetermined upcoming auto show in the US for more details, but for now you can delve into the official announcement below and scope out those same spy shots in the gallery above.