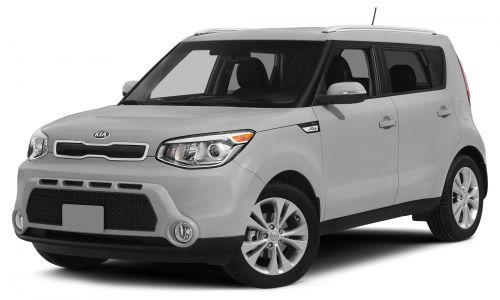 2015 Kia Soul EV whirrs in to the Windy City

Earlier this week, we got our first glimpse of the 2015 Kia Soul EV out on the road, completely uncovered. And even before then, executive editor Chris Paukert had the opportunity to drive a camouflaged electric Soul prototype on Kia's home turf in Korea. But now, finally, officially, the electron-happy Soul makes its debut at the Chicago Auto Show.
Powering the Soul EV is an 81-kilowatt electric motor that sends 109 horsepower and 210 pound-feet of torque to the front wheels. That's not immensely powerful, with Kia quoting a 0-60 time of "fewer than 12 seconds," but we're big fans of the instant torque thrust that EVs like the Soul provide. Top speed is electronically limited to approximately 90 miles per hour.
Kia says the Soul EV is good for roughly 80 to 100 miles of driving range.

A prolonged factory strike at Hyundai-Kia factories in South Korea could mean that US dealership inventory of certain vehicles, such as the South Korea-built Hyundai Accent and Kia Soul, could dry up in the coming months, depending on the length of the strike, reports Cars.com's blog, Kicking Tires. The two brands together rank sixth in US sales and fifth in global sales.
Kicking Tires gives fascinating insight into how a production stoppage in South Korea might affect vehicle sales in the US, considering Hyundai-Kia has two factories in the US that build the Kia Sorento and Optima/Optima Hybrid, and the Hyundai Elantra sedan/coupe/GT, Sonata/Sonata Hybrid and Santa Fe/Santa Fe Sport. The only one of these vehicles that's built solely in the US is the Kia Sorento, with the rest of them sharing production with South Korea.
Be sure to read the piece, especially if you're in the market for a Hyundai or Kia, or just interested in global economics.