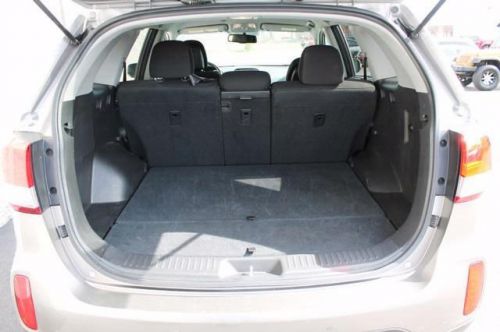 Power To Surprise! Nice SUV! This is what will make your family vacations even more fun...A 2014 Kia Sorento! This Sorento has plenty of passenger space and a hatch area with cargo room galore. CALL DAVID SANDERS FOR MORE DETAILS AND AVAILABILITY AT 855-518-5647!

It's been a long time coming, but it appears we might finally see a turbocharged Kia Soul next year. Kia officials reportedly confirmed the hotter Soul to Motor Trend recently, and also stated that the company is (still) investigating the use of all-wheel drive for the next generation of its boxy hatchback.
The turbo Soul will arrive with the same 1.6-liter four-cylinder found in the Forte, rated at 201 horsepower and 195 pound-feet of torque. According to Motor Trend, Kia wanted to launch the hotter Soul this year, but didn't have the retuned steering or suspension calibration, as well as the larger brakes, ready in time. Transmission pairings weren't discussed, but Kia does mate both its six-speed manual and automatic units to the 1.6T.
As for all-wheel drive, this isn't the first time we've heard reports on this front, and it seems like a pretty natural fit, to us. Adding AWD would allow the Soul to better compete with vehicles like the Nissan Juke and the upcoming Chevy Trax and Jeep Renegade. But as of right now, a four-wheels-driven Soul hasn't been given an official go-ahead.