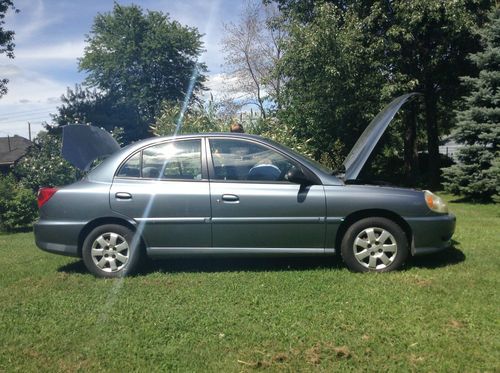 Condition: UsedA vehicle is considered used if it has been registered and issued a title. Used vehicles have had at least one previous owner. The condition of the exterior, interior and engine can vary depending on the vehicle's history. See the seller's listing for full details and description of any imperfections.Seller Notes:"some minor pain chips and blemishes on the sides and minor spider webbing in the front"

Selling this for an elderly family member.Barely driven and only in town as you can tell by the miles.It has had all reg servicing by the local dealer.Interior in near perfect condition.The only blemish is minor paint on the outside.Under the hood is immaculate.Priced to sell.Please message me with other questions of you need to come look at it.

Kia confirms $1B factory in Mexico to be completed in 2016

Kia is the latest in a string of automakers to announce plans to build new or expanded factories in Mexico. The Korean company has signed a $1 billion deal to establish a plant in Monterrey in the state of Nuevo León, with construction starting in late September. If everything proceeds on schedule, the facility should be complete in the first half of 2016 and be able to produce 300,000 vehicles a year.
The $1-billion investment will create a "new, highly automated manufacturing plant," according to Kia's announcement, a facility covering 1,235 acres of land. Confirming earlier rumors, Kia will produce compact models there, but the company won't reveal specific model names, just yet. When complete, the factory in Mexico will boost the automaker's annual capacity to 3.37 million vehicles a year with 1.69 million of those in Korea and 1.68 million abroad. It will also join Kia's plant in Georgia (where the Optima and Sorento are made) as the business' other North American location.
Kia hasn't kept plans for the Mexican factory a very close secret and openly admitted it was "being considered as a possible location" to Autoblog. The country was chosen partially because of its free-trade agreements (read: NAFTA), that make it less costly to move models elsewhere, not to mention its easy access to the North, Central and South American markets. The new plant should also alleviate some of the tight supply issues Kia has had in the US.