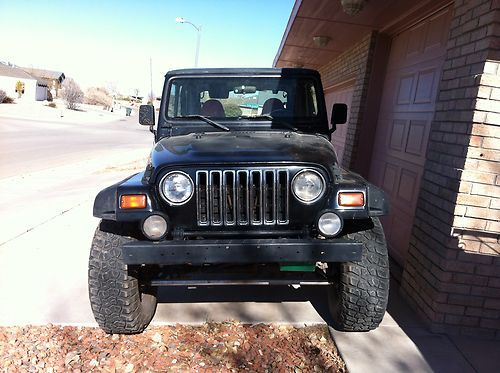 Engine works fine and was regularly serviced, especially for the 6 cylinder 105300 is a pretty low milage.
Suspension is in good condition and shocks were removed 5000miles ago.
Drivetrain works fine, has no leaks.
Some scratches and minor damage on the body.
Features:
6 " lift kit
35 " mud terrain tires (about halfway used)
JKS sway bar quick releases
Rancho 9000 rs shocks with adjustable ride
Smittybuilt offroad seats with four point shoulder harnesses
Sony CD radio with USB/Ipod dock
6 speaker sound bar, installed 2012
Hardtop
2 different Bikini tops, either cover for 2 seats or the big cover for all for seats
Spare parts included: 4 new tie rods, bikini top mounting, lap harnesses,
To sum it up. This Jeep is excellent if you are looking for offroad performance and still want to drive it on a daily basis.
Please contact me for further questions.