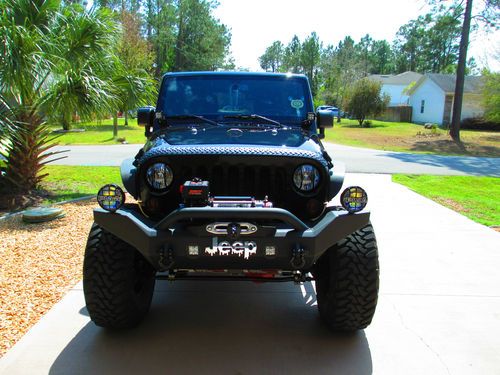 I have a 2013 Jeep Wrangler Unlimited for sale let me tell you about it.I started with a 6 inch lift by Skyjacker long arm and added 2 inch blocks  then i added a 1 inch spacer lift to give a total of 9 inches.then i added 38x13.50x18 Toyo M/T tires on Moto rims i have a set of five they and they have less then 500 miles on them.Then of coarse i had to change the gears i installed Rchmonds 5.13 in front and rear with ARB covers and while i was add it i also installed new drive shafts from Tom Woods Company.It also has duel stabelizer on the front,then  i took off the front and rear bumpers and installed ORF bumpers with side shields and Rock Steps.i also have a winch with synthitic rope.There are also 6 ligths installed from Rigid industries.Look at the pictures and see all the detail that was put in any question you can call me at 1-908-482-1796 Jeep is located in Palm Coast FL.32164