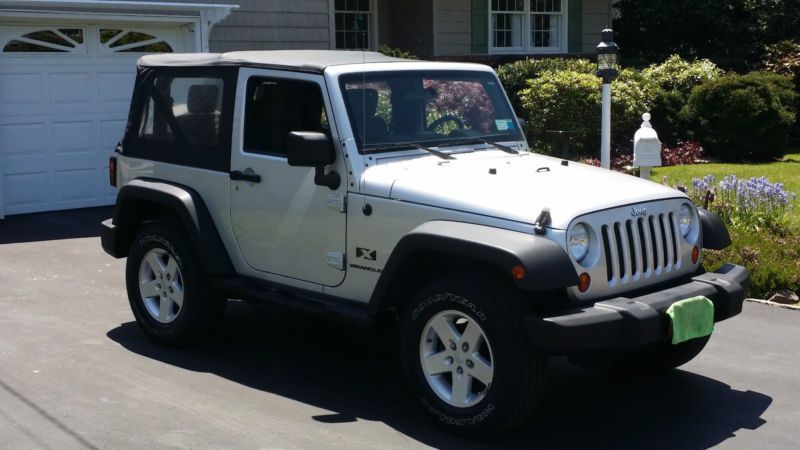 Please email me with any questions or requests for additional pics or something specific at: dickdmmoomaw@norwichfans.com .

Selling my 2008 Jeep Wrangler X 2DR 4x4, I am the "Original Owner", its "Never" been in an accident or on the
Beach, its has 31,800 Original Adult Driven Miles, the Jeep is "Silver" with Black Fenders, the interior is a
two-tone Gray cloth, All the Servicing has been done at the Jeep Dealer as one can clearly see on the Clean Carfax,
The 08' Jeep has a Timing Chain which will last you 200-300k miles Not like the Older Jeep's that have a Timing
Belt. This Jeep has the 3.8L V6 Engine that is known for its Reliability & Dependability. The A/C is Ice Cold, This
Jeep has the Overhead Stereo Soundbar for Premium Audio, This Jeep also has Power Windows & Power Door Locks, iPod
Audio Input, CD player & Bluetooth Upgrade capability, For Safety this Jeep has ABS Brakes, Electronic Stability
Control, and Driver & Passenger Front Airbags. I also had the Side Step Running Boards installed from the Dealer.
The Tires are in good shape with plenty of life left on them. The tires are mounted on 17" Factory OEM 5 spoke
alloy wheels. The wheels are in excellent condition with No Scratches, Dents or Signs or Road Rash. The Jeep has
New Brakes & a New Clutch (6 Speed by the way), The Top is in Excellent Condition (No Rips, Tears, or Broken
Zippers). There are No Leaks of any kind, The undercarriage is Rust Free as like I said earlier has Never been on
the Beach. There are a few small holes on the Drivers seat as seen in the photo from the ashes of a Cigar that
dropped. Other than that, the Jeep is in Excellent Condition both Inside & Out.