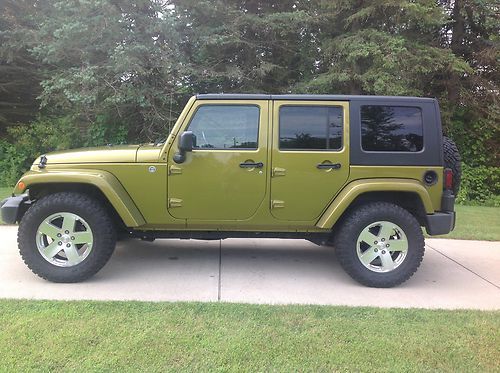 I have owned this jeep for the last 2 years. It is great. No warning lights on the dash! New brakes and tires. Tires are Goodyear dura trek 295's! I added 2 inch wheel spacers to help with clearance. This model has navigation and hard drive for music. Rare and hard to find with a 6 speed manual transmission, Shifts great! Color is the hard to find rescue green! Paint is in excellent condition. I don't think that this jeep has ever been  off road it is so clean! The miles are all highway! I removed the Sahara stickers from the front quarterpanels to clean up the look of the jeep. I only use Mobil 1 full synthetic oil. Comes with jeep brand rubber floor mates. The reason I am selling is because I am buying a Tahoe.