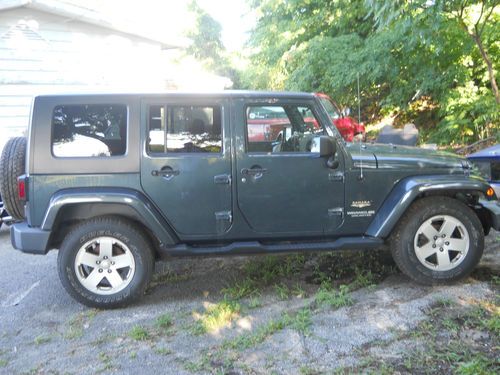 Condition: UsedA vehicle is considered used if it has been registered and issued a title. Used vehicles have had at least one previous owner. The condition of the exterior, interior and engine can vary depending on the vehicle's history. See the seller's listing for full details and description of any imperfections.Seller Notes:"This jeep was in an accident and needs a new front differential and steering arm and what you see on the body,driver fell asleep and hit a guardrail,it runs like new and the interior is nice,windshield is cracked,it has new 18" tires,brakes,battery,cold ac,All options include removable dual tops,NO frame damage!Title reads 75,565, Any Qs 440 319 4847"

This Jeep hit a guardrail and is a very easy fix,it needs a front differential {dana30 410 gears} and a steering control arm,windshield and what you see on the body,it is loaded inside with factory gps,dual removable roofs.Motor and transmission and transfer case are fine,comes with a ohio salvage title!error on the miles title reads 75565, THIS IS A VERY EASY Fix!!!!!!! Any Qs call 440 319 4847