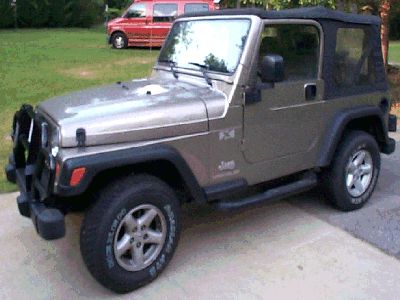 Condition: UsedA vehicle is considered used if it has been registered and issued a title. Used vehicles have had at least one previous owner. The condition of the exterior, interior and engine can vary depending on the vehicle's history. See the seller's listing for full details and description of any imperfections.Seller Notes:"there are no defects, dents, or dings, my jeep stays garaged you will find no faults"

when I decided I wanted a jeep, I have had 5 over the years, I looked local in columbus ga, I tried dozens out, they all had faults I could not live with, either they were 4 cyl or they were straight shift, or they had some condition problems, high milage, or the 4 wheel drive was noisy, I looked on ebay it was the same, I looked at dealers, I just was not going to settle for anything but what I wanted, finally I went to lagrange, ga. and I happened to see a row of jeeps out front of mike patton jeep dealer, so I stopped and looked at them, and the salesman walked out as I was about to leave, and I said dont you have any used jeeps, and he said yeah, one, I said where he said right on the front row, I said I didnt see any, he said yeah its right there, hell it looked as good as the new ones, if it was just a 6 cyl, automatic drive, it was, so I opened the doot and it looked just as good on the inside, it had 106,000 miles, so it was price, we agreed on 12,200. so I bought it, and never had a problem, they had some sort of 25 point plan where they go through it, and made it where I trusted there plan, and never have had one problem. the only thing is they had these off road type tires on it, so I bought all terain tires new, and it made the jeep drive like my wifes suv. it IS A VERY NICE DRIVING VEHICLE, the only thing is I had now 4 vehicles, I had a truck also. I have 10 acres, and there are storms, and ice, and I used a truck to haul fallen limbs, and trash and I buy lumber from time to time, I sold my truck, after a year I want a truck back, I just cant get along without one, so I need to sell my jeep it is just a necessity. it has caused a problem not having one. also I had an auto check when I bought it, and still have the copy I got from the dealer. it graded out 93, also any more info call me jim weaver 706 594 1794.the 4 wheel drive you can barely feel it go in, and no grounting noise, it is problem free, and perfect to me, I keep it garaged and it now has 107,000 miles. you just want find a problem