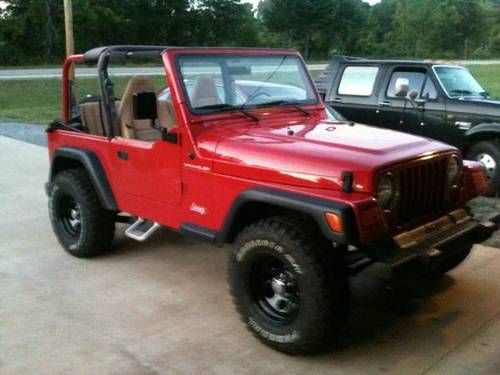 Condition: UsedA vehicle is considered used if it has been registered and issued a title. Used vehicles have had at least one previous owner. The condition of the exterior, interior and engine can vary depending on the vehicle's history. See the seller's listing for full details and description of any imperfections.Seller Notes:"Bright Red Jeep Wrangler, Good Condition... Original soft top, tan in color with tinted windows, Cold factory AC, Half Doors, After Market Tires and Wheels (All 5, Spare has never been on the ground, 75% Tread on the other 4) size 31.1050x15, aftermarket CD player and speaker bar. Jeep looks very good, has scratches on passenger door that you can see when you get up close. 5 Speed manual transmission, 4 Cylinder with 163,000 miles."