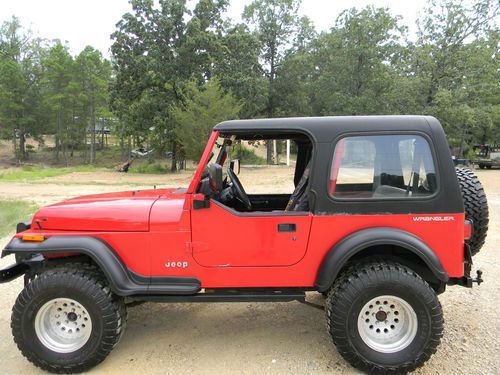 Condition: UsedA vehicle is considered used if it has been registered and issued a title. Used vehicles have had at least one previous owner. The condition of the exterior, interior and engine can vary depending on the vehicle's history. See the seller's listing for full details and description of any imperfections.Seller Notes:"Normal wear and tear for a Jeep this age. Runs good, 4x4 works, no smoke, shifts fine."

1995 Lifted Jeep Wrangler Rio Grande Sport Utility 2-Door 2.5L. Comes with 2 sets of doors and Hard Top. Runs great, everything works. No smoke. The gas gauge is a little off. 1/4 tank is empty, showing 1/2 means you have 1/4 tank etc. Jeep is for sale locally and I reserve the right to end the auction early. Thanks for looking.