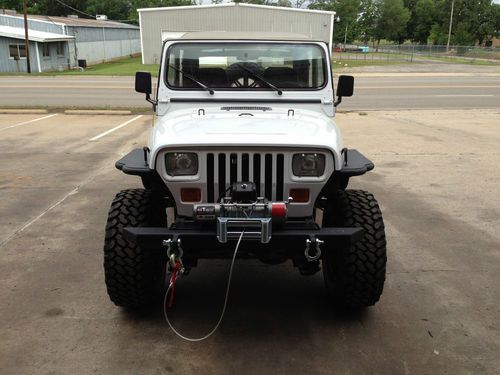 This is a 1991 Jeep Wrangler 4x4 5 speed 4 cylinder with a 4'' Rough Country lift kit. It has 114,xxx miles and it runs and drives great. The interior has been sprayed with bedliner and is in good shape. It has a Bestop Soft top and 5 Brand New 33 x 12.50 17inch ProComp MT tires mounted on new aluminum wheels. It has a new Smitty Built front and rear bumpers with d-rings and a 8000lb westin winch and the rear has a spare tire mount, also it has Smitty Built front and rear fenders with flares. I have the Jeep for sale locally and reserve the right to end the auction early upon local sale. Thanks