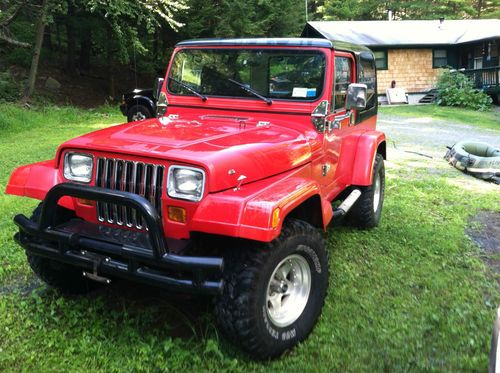 Condition: UsedA vehicle is considered used if it has been registered and issued a title. Used vehicles have had at least one previous owner. The condition of the exterior, interior and engine can vary depending on the vehicle's history. See the seller's listing for full details and description of any imperfections.Seller Notes:"has usual rust in the usual spots on the rocker panels, and frame rust and rot."

This 1989 is lifted, has nice lines, chrome package, tube bumpers, 6 cylinder 4.2, manual transmission, 33 12.5 15 rubber on American Racing rims,sound bar, CD player, and it's killin' me to sell it, but, too many toys. It needs a new clutch, some body work and frame welds to bring it back to perfect. Engine runs strong, transfer case recently rebuilt, new exhaust last year, synthetic oil always. I'm not in any way looking to give my toy away, so, don't waste my time or yours with low ball offers. Thanks for looking.