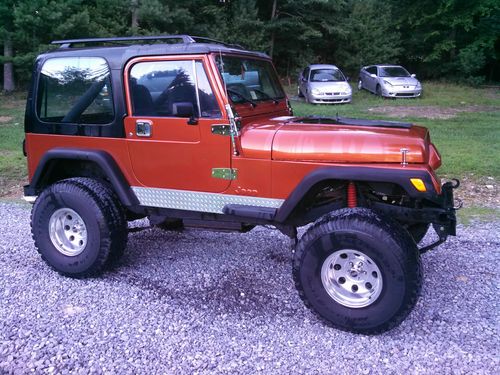 This is a 1988 Jeep wrangler that I restored in 2007. I have had fun with it, but now I just don't need it anymore. It has never been off road since I've had it. It has a hard top, bikini top, hard doors, and soft doors that go with it. I repainted it in 2007 but some of the clear coat has started coming off because it's been outside the whole time and the sun has been on it all the time. The engine that is in it is a throttle body injected 350 chevrolet v8 out of a 88 1500 truck. It is stock and runs great. The engine has about 115000 miles on it now. The trans is a turbo 400 and I had it rebuilt in 2007 by aamco. It also has a shackle reverse kit to help with the handling. Overall it has 7 inches of lift total. The tires are BFG AT's and they look almost brand new they are 35x12.50 on 15x10 inch american racing wheels. I would say they still have 85 to 90 percent tread. The interior is in good shape with no tears, but I put roll on bedliner for the floorboard instead of carpet because it's better if it gets rained in when running the bikini top. This is a really nice jeep that I put a lot of work into, but now I'm ready to sell it.  I also have it for sale locally so I reserve the right to pull the auction if someone buys it here locally.  Thanks so much for looking!