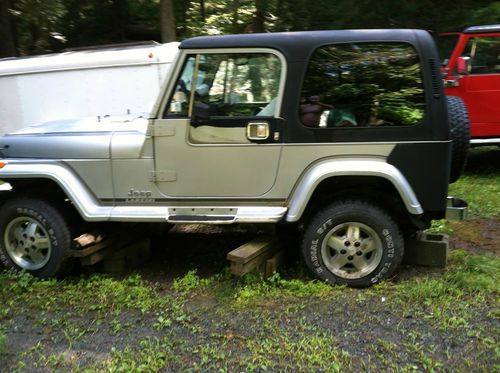 Condition: UsedA vehicle is considered used if it has been registered and issued a title. Used vehicles have had at least one previous owner. The condition of the exterior, interior and engine can vary depending on the vehicle's history. See the seller's listing for full details and description of any imperfections.Seller Notes:"Project jeep"

I'm selling my project jeep. This is a 1987 Jeep Wrangler Laredo. The interior is the laredo style and the seats and carpeting are still in new condition as the previous owner was a school teacher and removed the carpet and put it in storage to prevent it from getting dirty. It has never been off road.

I bought it to restore it for my wife. She is no longer interested in owning it, so, we're selling it.
It has full doors, hard top, 6 cylinder, manual transmission, Alloy wheels, Laredo interior in excellent condition, chrome grill, chrome bumpers, brand new spare, new rear corner panels, etc.
Does not run. Either the starter is no good or the engine has an issue. I'm not a mechanic by trade, so, I'm hoping to sell this one to someone who is either looking for parts or will do the restoration. I do have new parts as well and if the winning bid goes to above $2000 I will include all. The parts I have are - new catalytic converter and muffler, new CD player, new chrome hinge package with chrome steps and air intake grill and foil, gas tank cover. I also have 15 inch tires that are used on stock jeep wheels that will fit to replace the tires and rims on the vehicle now.
Good luck bidding and questions can be answered by email at martin6359@frontiernet.net.