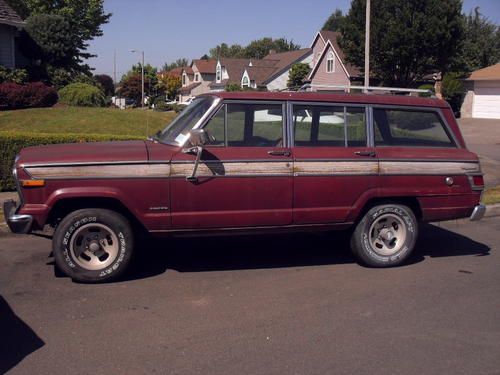 NO RESERVE THAT IS THE WAY THIS AUCTION ENDING ' GOING TO BE SOLD THEHIGHEST BIDDER  OF AUCTION' BUYER WILL DEPOSIT THE FULL PAYMENT OF AUCTION PRICE 'INTO MY ACCOUNT NO LATER THAN 48 HOURS ' IF YOU HAVE ZERO PERCENT FEEDBACK I WILL NOT ACCEPT ANY BIDS SORRY '
THE BUYER CANT INSPECT AFTER AUCTION OR DESIDE TO LOOK BEFORE MAKING A PAYMENT SORRY THIS IS A NO RESERVE AUCTION '
IF YOU BID BE PREPARED TO BUY  SALE IS FINAL '    THANKS FOR READING BE HAPPY BIDDING   RARE WAGONEER '
HERE SOME INFO '  THE JEEP IS ALL 100% ORIGINAL EVEN THE ORIGINAL PAINT FROM 1979 RARE '''
READ THIS  THERE IS NO RUST TO BE FOUND INSPECTED ZERO RUST ' I HAVE TAKEN PICS OF WHERE THESE JEEPS RUST AT NOTHING SOLID '
THAT IS VERY RARE TO SEE ' THE VERY RARE WAGONEER NO RUST NOT ONE DENTS ONLY DENT IS ON ONE CHROME REAR MOLDING ON QUARTER PANEL  THAT IS VERY ATRACTIVE TO SEE FOR A BUYER NO BODY REPAIR NEEDED  THE PAINT IS FADED WILL SHINE UP REMEBER THIS IS THE ORIGINAL PAINT ' NO RUST ON THE BODY  RARE '  INTERIOR INFO '  HEADLINER  FALLING APART  REAR SEAT TAKEN OUT YEARS AGO  FOR USE OF HAULING IN THE REAR FOR CARGO AREA ' NO REAR SEAT ' FRONT SEAT IS  IN GREAT SHAPE DASH DOOR PANELS SEE PICS NICE '
NOTHING IS MISSING ON THIS JEEP ACCEPT THE REAR SEAT '  ORIGINAL STOCK WHEELS ' ORIGINAL LUGGAGE RACK ' ORIGINAL WOOD TRIM IS OLD IN WORN OUT FROM SUN '  ENGINE INFO   RUNS GREAT GOOD SUND NO NOISES POWERFUL HAS BEEN NOT DRIVEN FOR 2 YEARS '
SO A FRESH TUNE WOULD BE NICE BUT IT START'S AND RUNS GREAT  TRANSMISSION INFO SHIFTS INTO ALL GEARS LIKE IT SHULD '
CLEAN CLEAR TITLE HERE IS YOUR CHANCE TO BUY ONE ORIGINAL NON RUSTED JEEP WAGONEER ' GOOD LUCK TOU YOU ALL '
MAY THE BUYER BE HAPPY OF A SOLID JEEP  IF YOU NEED TO CALL PLEASE DO 503.888.5423