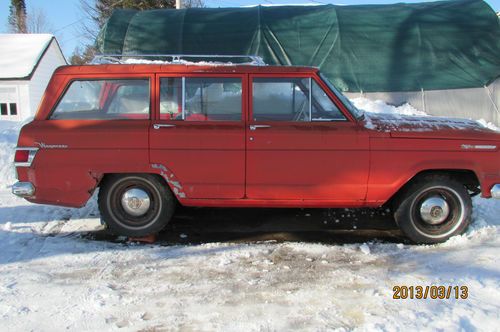 This is a 1967 Kaiser jeep corporation jeep with the optional 5.3l "vigilante" 327 V8  see pic for original miles the 4x4 works 3 speed shifter bench seats both front and back back folds down for extra cargo space original full size spare  jack to 'pretty cool ' back minimal wear front some rips dash good condition back window cracked but still rolls down runs and in the process of cleaning the fuel tank and tubes cleaned carb with carb kit 2 barrel holley carb rust normal for the age and location  wouldn't cost a lot to repair or replace  floors are in good shape carpet looks like it came out of the sixties tires have tread but are sun weathered but still hold air very well any questions feel free to contact me shipping is local or you can arrange pick-up      thanks a lot and enjoy bidding