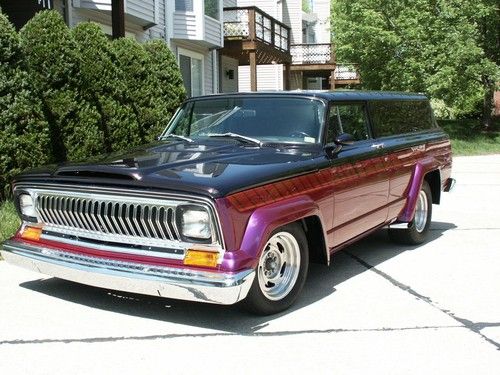 One of a kind Jeep Wagoneer that has been chopped 4" and lowered onto a Corvette drive train.  Engine and drive train has been professionally rebuilt or replaced within the last 500 miles.  The car has all newly installed wiring harness, gauges, front suspension and brakes including new lines rotors, pads and master cyl. AC unit is new, but right now is not installed on the car.  Removed to use in parades.  Interior has leather Corvette seats (full power) and console plus new carpeting.  This car has much more to offer which I will be glad to discuss if you are interested in the vehicle.  I'm selling because I am too old to work on it as a hobby which is why I bought it in the first place.  This is not a show car, has minor dings and small scratches, but is a GREAT parade/advertising car as you can see from the photos.  Advertising vinyl will be removed.  And, it truly is a Hot Rod which means it is powerful and totally fun to drive.  Call 314-629-8329 serious inquiries only.   Buyer pays 10% of purchase price at auction close and balance by certified bank check which must clear before title is signed over.   Buyer responsible for pick up in Ballwin, Mo or arrangement for shipment.  Car can be pre-viewed upon request.  No warranty implied, selling as-is.