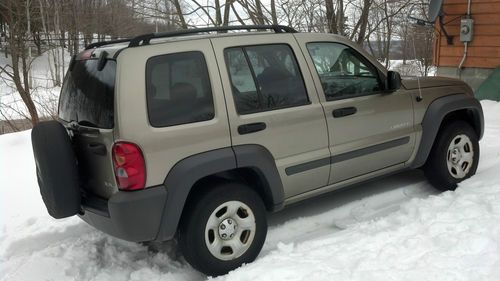 This is a 2004 Jeep Liberty Sport 4x4 with 115,500 miles. Has power windows, power locks, cruise control and keyless entry. Selectable 4wd on the fly with 2wd, 4hi and 4lo settings. Exterior is in good shape in exception of one rust spot on the lower corner of the drivers side door, I patched it up last year before the winter but it is starting to rust through again. Runs and drives great and has always been very a very dependable vehicle, awesome in the snow. Will need new tires soon, otherwise it is mechanically perfect and needs nothing. The interior is in pretty good shape, there is one tear on the drivers seat. The rest of the upholstery is in very good condition but there are a few minor stains throughout. Just bought a new truck and can't afford payments on two vehicles. Reserve is set at what I owe on it.