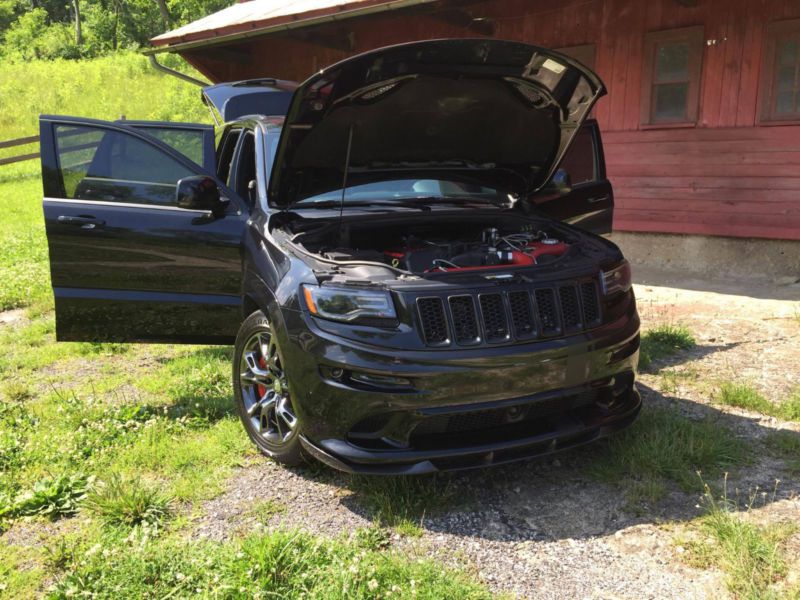 If you have any questions feel free to email me at: hilmahmmoyers@ukhealing.com .

2014 Jeep Grand Cherokee SRT
Black on Black
Purchased December 2014 brand new from Chagrin Falls Jeep in Ohio
Summer 2014 it was equipped with a nitrous kit. Installed by Big 3 Racing. Ran 12.8 at 109MPH.
After a few months of that, winter came around and we decided to give it to Big 3 Racing again and this time we
went full on with it. We had a custom 1 off turbo kit built from the ground up.
After that it ran an 11.3 at 122mph.
It's equipped with a Presison Turbo 7675 single turbo. Full custom exhaust work to magnaflow mufflers. Customer
electronic exhaust cut out in front for when you really want to hear that turbo sing.
It made very respectable power, on 6 psi it made 600whp, on 10psi it made 730whp and on 12psi+50 shot of nitrous it
made 800whp.
Fully equipped with a supporting fuel system, but also running a methanol kit to help keep all the numbers safe and
HAPPY across the board.
The engine was FULLY built from head to bottom end. All specific parts are included in the pictures I have uploaded
of the major receipts from the build.
Full stop tech brakes all around with race pads, strong bite with A LOT of life left.
In terms of aesthetics, it had WinninWindowTints full tint, a matte black stripe that's subtle and clean, SRT
windshield banner, Black Ops front lip that was carbon wrapped same with rear spoiler and trunk trim.
It's definitely a show stopper. Stored winters. Has only seen snow once! We always get complimented on it, have had
people actually follow us to admire it and ask questions.
Haul the family around while still being able to kick the doors in on a Vette or Mustang.
All in all we have about $150k wrapped up into the Jeep, originally purchased for $65k.
With that being said, the asking price is $79,000.00. The only reason it's being sold is to invest into a
transportation business. As the economy stabilizes again, we need to expand accordingly!