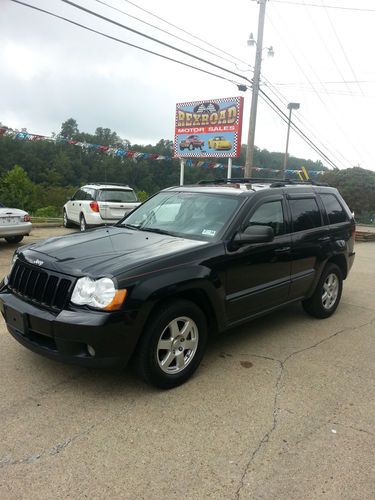 Condition: UsedA vehicle is considered used if it has been registered and issued a title. Used vehicles have had at least one previous owner. The condition of the exterior, interior and engine can vary depending on the vehicle's history. See the seller's listing for full details and description of any imperfections.Seller Notes:"power pedal doesnt work"

I am selling my 2009 Jeep Grand Cherokee, It has  Reconstructed title. I bought this Jeep with a Salvage title due to it was flooded. I have gone through the jeep and replaced many electrical parts, as well as changed all oils and fluids, i also replaced the battery with a 5 year. This Jeep runs Great and drives even better. It has leather seats, a sun roof , navigation, sat. radio, power everything, and many more options. The only thing i couldn t get to work was the power pedal, and it could probably be fixed with new pedals. The tires on the jeep and about 50% tread all the way around. The wheels are in great shape and look nice. I have driven the Jeep over 3000 miles with no problems. I do believe it would make a dependable driver. I am also selling this jeep locally and have the right to unlist at any time. Thanks for looking and happy bidding!!