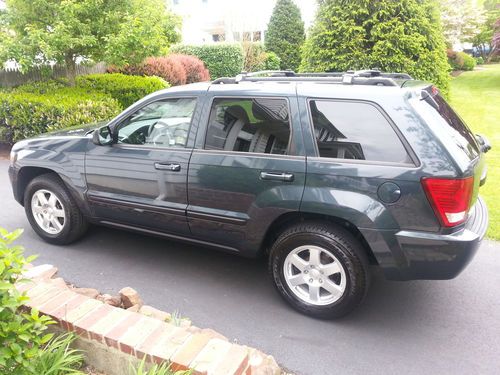 Condition: UsedA vehicle is considered used if it has been registered and issued a title. Used vehicles have had at least one previous owner. The condition of the exterior, interior and engine can vary depending on the vehicle's history. See the seller's listing for full details and description of any imperfections.Seller Notes:"2008 Jeep Grand Cherokee- no defects, no scratches, no wear and tear. 86k miles."

-This car is in great condition, and has been serviced regularly.

Condition: No dents, dings or mechanical problems with this car. Just very minimal normal wear, as is evident in the pictures. Brakes and tires were replaced one year ago. Completely smoke-free environment in the car. The car was involved in two parking lot cosmetic accidents that were completely fixed, making the exterior look brand new.
Features: Aside from all the normal features on a 2008 Grand Cherokee Laredo, the car comes equipped with a great roof rack, is blue-tooth enabled, and Sirius Satellite Radio.
History: This car has only two total owners since coming off the lot brand new. The current owner (myself) purchased it from World Jeep Shrewsbury in Tinton Falls, NJ in 2011 coming off of a lease from that location as well. The car was serviced August 22, 2013 with a premium service, including rear differential service, fuel injection service and an extreme oil clean additive.
Shipping: Car must be picked up in person by buyer or an agent of the buyer. Additionally the buyer can arrange shipping of the car. The car is currently located in Central New Jersey, Monmouth County 07701.
Payment: Deposit of US $500.00 within 24 hours of auction close. Full payment required within 7 days of auction close.
I will be commuting a substantially longer distance in a few months and am looking for a smaller car.