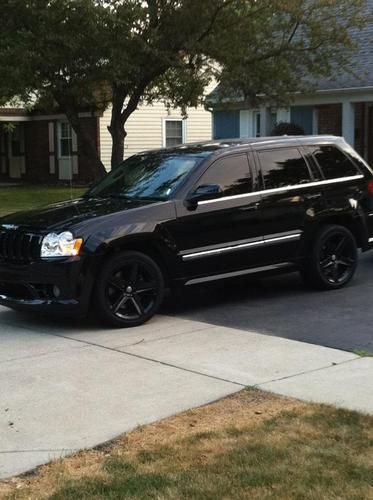 This car has the following done to it. $4,700 done to the transmissions and brakes to ensure it runs for another 110,000 miles for the next owner. Warranty on all work done through Feeny Dealership. New brake pads. New all season tires. Still Headlight covers. SRT wheels powder coated gloss black by a shop in Addison with a lifetime warranty. Can bring the wheels back and get any color you prefer (graphite gray, alloy stock color, etc.) Brand new factory SRT8 rear bumper. 20% window tint on all windows. If it wasnt for the 2013 GC SRT8 I wouldnt be selling this truck.This truck shouldnt last long on the open market and Im not saying that as the owner, Im saying that as a car fantastic.

Condition: The truck has a top of the line, $300 iPod integration/adapater player with a lifetime warranty on that. It was installed in the center console and runs under neath the cup holders and gear box. It also has a kill switch, which allows you to knock out any frequency coming from other cars surrounding you on the road. This truck has been babied. Washed once a week and never taken through a brush car warsh where it could collect swirl marks and etc. Either hand washed or taken though the touchless car wash. It has been detailed once every 6 months. Whoever buys this SRT I am going to take it into the #1 auto detailing shop in the Chicagoland area for an interior and exterior detail. The truck will look close to brand new for my new buyer. There are minimal flaws with the interior. Almost as a good as new. The exterior is in great shape. Hasnt seen much snow and salt.