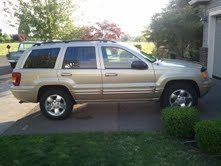 Condition: UsedA vehicle is considered used if it has been registered and issued a title. Used vehicles have had at least one previous owner. The condition of the exterior, interior and engine can vary depending on the vehicle's history. See the seller's listing for full details and description of any imperfections.Seller Notes:"Light scuff on front bumper, hinge supports for hood are giving out to hold hood up and 10 disc player in rear not working properly, but in-dash cd and tape does work. Lower tread on tires. The rest of vehicle in great condition with no other damages and no mechanical issues."
2001 Jeep Grand Cherokee Limited Loaded - Nada.com value 6K, Excellant Condition, Sand Color, Beige Interior, Leather Heated Memory Seats, Information System, Full Hitch with wiring, V8, A/C, CD, 4WD, 147,650 miles, Aluminum Rims, Automatic Transmission, Security System, Power Seats, Power Mirrors, Keyless Entry, Cruise Control, Sunroof, Woodgrain interior, Fog lamps and  One Family Ownership etc.!!!!