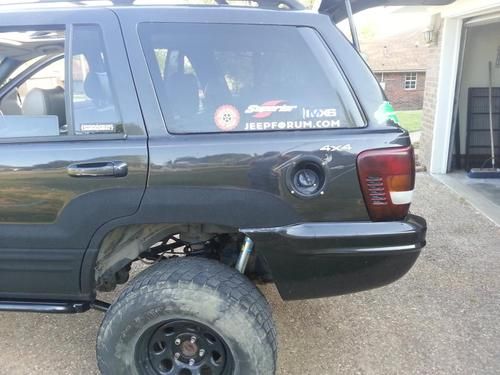 Hello everyone today I am listing my 1999 Jeep Grand Cherokee limited up for sale. this is no normal wj. It includes over $15000 worth of upgrades and accessories. This Jeep OWNS on the trails and will get you from A to B in style. the only reason im selling is that I want to start a 79 trans am build so I need funds. I have title in hand!!! here is a BIG list of most of the stuff that I have done or had done...Iron rock offroad 6.5" premium long arm lift kitNP242 HD transfer case Slip Yoke EliminatorCarolina Driveline front double cardon drive shaftIRO rear double cardon drive shaftIRO slip yoke eliminatorBILSTEIN 5100 series shocksCragar soft 8 rims285/75/R16 Nitto Trail Grapplers (40% tread)JBA HEADDERS cat back exhaust system (cut loose - still have it)rhino lined door cladding JKS quicker disconnectsADDCO rear sway barAUSSIE LOACKER in the rear D44IRO dual front steering stabilizerSuperchips 3715 programmertrans-go 45rehd shift kitoptima yellow top batteryupgraded 160amp alternator upgraded akebono brake calipersESC drilled and slotted rotorsmoog balljointsmoog tierod ends new tierodTons and Tons more has been done. like I put in the title one of kind. but the greatest part is that it has a car pc!!!! SAY WHAT??? that's right, a car-pc (JEEP-PC)! it consists of a 10.2" touch sensitive lcd display wired to a 300watt dc to dc Powersupply and to a mini itx mother board with gaming memory and a solid state drive! It has WiFi as well so you can connect to the internet with a tethered android device using a tethering app. I ran iTunes on my desktop with windows 7 home premium. sound was ran through a soundblaster audio card as a preamp before it went to my amps. I promise you that you will be amazed.