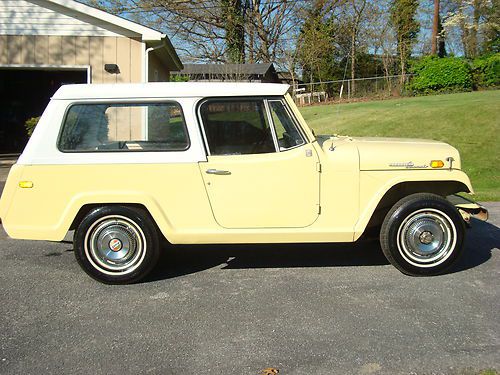 Up for bid a 1970 Jeepster Commando. It was my late Father in Laws. He was the originally owner and only drove it in town. It has always been garage kept. He owned and operated a Upholstery Shop for 40 plus years here in Hendersonville, NC. He done all the custom upholstery himself. There is minimal rust on the vehicle. It was painted approximately 10 years ago. I do believe it was painted the orignal color. As far as it running it has not been started in about 3 years, but is still garage kept. Previously there were never any problems with the motor or the operation of the vehicle. The vehicle is 100% stock, it has never been wrecked and is definitely one of a kind. I have all the original paperwork and would love to find someone who will take care of it as my late father in law did. If you have any questions or would like more pictures please let me know.