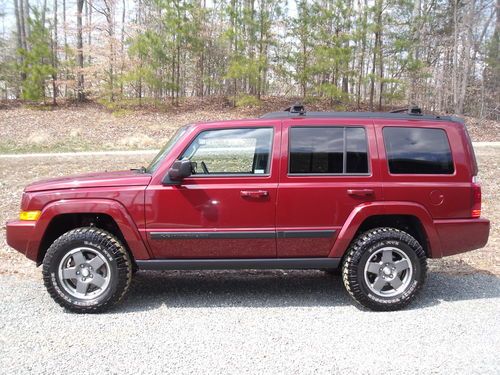 2008 Jeep Commander sport 4x4, 3.7L V6,cruise control l, traction control, alloy wheels, back-up sensors,  leather seats, both front seats are full power with seat heaters, overhead air bags, adjustable pedals, remote start, third row seating w/ climate controls,  full roof rack, boston sound system  dvd, MP3 &  satellite radio w/ steering wheel controls, the interior is in A+ condition, non-smoker car. This jeep looks great with its  2" rough country lift kit installed and 32" Mickey Thompson BAJA tires there is road noise with these tires, a compromise you must make to have that look. this was done for looks only, it has never been off-roaded. It has never been used to tow and has no hitch installed. There is a small dent/chip on the passenger side of the hood where a tree branch fell on it. see pic. the sunroof does not open, the motor works, seems like its off track.