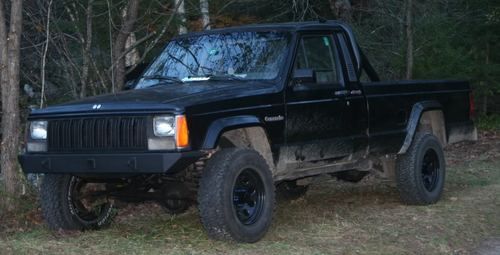 I parked this a few months ago after I bought it last year. I went through a divorce and no longer have the time for a project vehicle. The battery drained and it had problems stalling when the foot was off the gas occasionally. I got it down to it being either The injectors, Iac, Throttle body, or o2 sensor. The jeep includes 6 brand new high flow injectors, a new iac motor, and a new o2 sensor that are uninstalled. Driver side window doesn't work, and i have a new turn signal/wiper/cruise control stick. Has a factory gas tank skid plate, front skid plate, dana 44 rear axle, column shift, and 4x4. One rocker is starting to rust, the other is pretty solid. The bed and under body are also very solid has very little rust overall considering is 25yo. Its a blast to drive. would make a good project for restoration.    I can provide better pictures if needed. It will need to be flatbeded or towed unless you want to get it running if your good with jeeps. I have original title. the truck original came from mass. Just want to see it go to a good home. Be aware it is as is and a project. Your job to arrange pickup but I'll be here. Also no front door speakers, and tailgate doesn't have latch and the previous owner tried making it have the shaved handle look with bondo. Brand new rear speakers.

Has newer tires.
Brand new rims with 4.25 backspacing. (5x)
Brand new exhaust system
New cv joints and ball joints
New radio
Has a off road front bumper with d shackles(in truck)
Newer radiator
roll bar
dana 44 rear axle
long bed model
currently inspected in vt
4.0 4x4 drive column shift.
will include master cylinder and brake booster from a wj that i intended on installing to upgrade the brakes.
Its an awesome truck and I hate to get rid of it but can't handle two vehicles at this time.