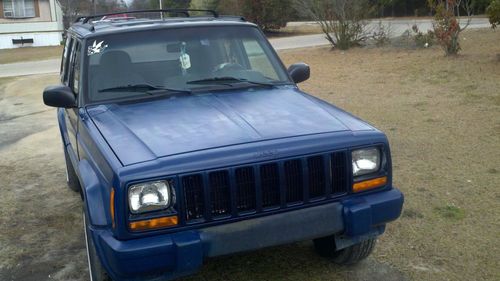 -no mechanical issue as known

I had this car since 2007 and the only part change on it was the catalytic converter and radiator. Since Ive been the owner I had no accidents. The only major damage is that the top inside of the vehicle carpet is loose and has a hole.  It just passed inspection.. Even though it has 247,676 miles, it runs very good and is a very dependable car.  If interested you are more than welcome to come by and take a look. Just contact first. Thanks...

The 2014 Easter Jeep Safari is set to begin this weekend in Moab, Utah, and while it's sure to be a blast for Jeep enthusiasts from all corners of the world, we're looking forward to the wild, off-road ready concepts that Jeep will be bringing to the red rocks. As you can see in our handy headline, there are six such vehicles in total, each of which sports a variety of tweaks and custom bits.
Unlike in years past, where Jeep graced us with some outrageous concepts like the Mighty FC or J-12, this year's vehicles are a bit more restrained and a bit more buildable by enthusiasts. That's not by accident, officials tell us. They wanted to put this year's focus on attainable vehicles and accessories from Mopar and Jeep Performance Parts that existing owners can use to augment their own vehicles. So let's get to it.
We'll start with the Wranglers first. There are three concepts of the jeepiest of Jeep coming to Moab - the Level Red, Maximum Performance and Mojo. The Level Red and the Mojo (seen above) are similar from a suspension and engine standpoint. Both boast a two-inch Jeep Performance Parts lift kit, which officials tell us is coming to market in the next few months. There are a pair of Dana 44 crate axles on both the front and rear, while a Jeep Performance Parts Rock-Trac transfer case has been fitted. The 3.6-liter V6 engines on both Jeeps can breathe a bit easier thanks to a new cold-air intake and exhaust system.