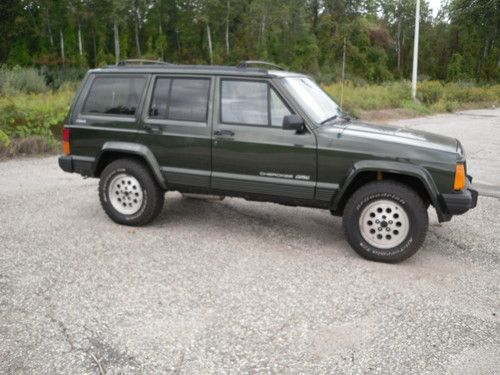 Condition: UsedA vehicle is considered used if it has been registered and issued a title. Used vehicles have had at least one previous owner. The condition of the exterior, interior and engine can vary depending on the vehicle's history. See the seller's listing for full details and description of any imperfections.Seller Notes:"This is a good running 4 x 4 , normal wear for year and mileage, slight surface rust starting on the passenger side rocker (has been undercoated)not bad but wanted to mention, the floors good- prior owner had done. interior is very good tires and paint good. a/c not working/heat good."

THE ORIGNAL JEEP SPORT UTILITY  ON OR OFF ROAD A SENSIBLE CHOICE!!!  THIS STRAIGHT 6 IS  IN ABOVE AVERAGE CONDITION FOR ITS YEAR AND MILEAGE.   THESE TRUCKS ARE ONE OF THE BEST PUT OUT BY FAR,  QUESTIONS PLEASE FEEL FREE TO CALL FRED AT 413-531-1341..

While there's no shortage of excitement surrounding the new Jeep Renegade, one of the limiting factors to the little trucklet will be its price. With the Kia Soul starting at $14,900 and the Nissan Juke kicking off at $18,990, the Renegade can't afford to stray away from that price bracket.
And judging by some potentially leaked pricing info, it won't. A quick Google search of "Jeep Renegade Price" reveals (at least for now) that the Italian-built Jeep will start at $18,595. The "as shown" price of $25,895 seems to indicate the Trailhawk model shown on Jeep's consumer page.
If the $18,595 figure is correct, it's likely for the base, two-wheel-drive Sport model, with the Latitude and Limited trims falling somewhere between there and the $25,895 as-equipped price of the Trailhawk.