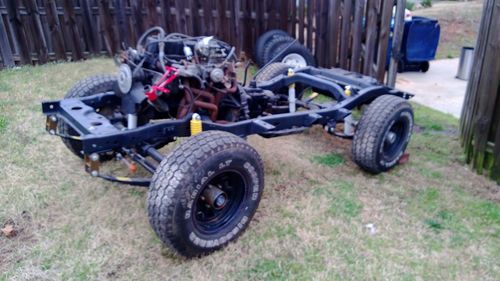 Condition: UsedA vehicle is considered used if it has been registered and issued a title. Used vehicles have had at least one previous owner. The condition of the exterior, interior and engine can vary depending on the vehicle's history. See the seller's listing for full details and description of any imperfections.Seller Notes:"Used..Restoration"

This is a 1986 Cj7 Chassis and motor. The chassis has been completely re powder coated and painted and has a brand new gas tank, brand new suspension and new wheels and tires. the motor is the 258 inline 6, 4 speed manual trans. It has roughly 76,000 miles on it. This jeep was a project that i never got around to. It had been in my garage for about a year until just a few months ago i had to move it to the backyard to make room in the garage. It has been covered up well Though and has not taken much wear from the wether. If you have any questions feel free to ask. Thanks!