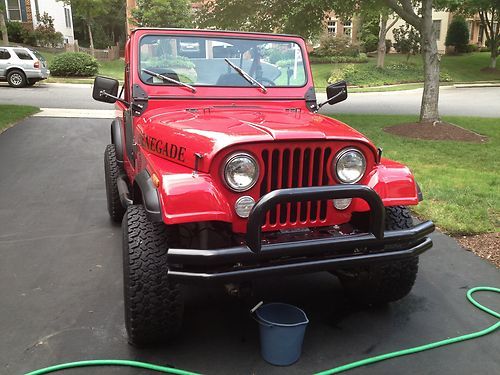 Condition: UsedA vehicle is considered used if it has been registered and issued a title. Used vehicles have had at least one previous owner. The condition of the exterior, interior and engine can vary depending on the vehicle's history. See the seller's listing for full details and description of any imperfections.Seller Notes:"Great mechanical condition. Interioir is veg nice and clean. Paint is fresh and bright with a few scratches. No dents or dings.Jeep is rust free with a new frame, new lift, body is steel."

I bought this jeep and just can't justify keeping it around as the wife wants something both of us can have fun with...I see a pink corvette in the future:)
It is really a nice car and I've gotten many comments about it.  Runs very well and smooth.  Highway speeds at 55-65 are not an issue.  All gauges function.  The electrical is clean (for a cj) and is in working order.  The 4wd engages and runs as it should.  The jeep does not currently have heat ($200 tops).  Lights, turn signals all work.
Dana 44 rear,  tires are 33x12.5x15
I only have the bikini top and half doors.
A few details ( I do not have majority of the receipts, they were given to me by previous owner however I didn't keep them thinking I'd have this for ever)
The following has been done within the last 10k miles
- new frame (not a reused frame or refurb but an actual new frame)
- rebuilt transmition
- rebuilt engine
- new floor boards where needed
- new master cylinder
- new stainless brake lines
- rear brake overhaul
- new speaker
- new paint ( very nice but not an 8k show quality job)
- much more
- new fuel control module
- power steering
- rhino lines interior
- power steering (stock)
Feel free to ask any questions