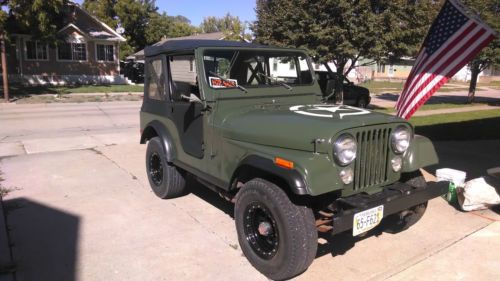 Condition: UsedA vehicle is considered used if it has been registered and issued a title. Used vehicles have had at least one previous owner. The condition of the exterior, interior and engine can vary depending on the vehicle's history. See the seller's listing for full details and description of any imperfections.Seller Notes:"Overall great condition. The only problem is the synchronizer from 2-3 is out in the transmission. There are two very small(smaller than a dime) rust spots. Paint is in excellent cond. Tires have around 50% tread left. I was always going to put new rubber on it, just never got around to it."

This is my 1979 Jeep CJ5. It has the hard to find AMC 401 cu in, not the 304, it just wouldn't let me take that part off of the ad. The engine runs perfect. Basically stock otherwise. T150 3-speed trans. The synchronizer is out from 2-3. That is about the only problem with the vehicle. Could use some new rubber eventually as it has more of a street tire on it. Best Top SuperTop is 3yrs old and in excellent cond. It is the black denim color. Also have Bikini top. Bedliner on inside of tub. Milodan chrome valve covers. Headers. Exhaust out under both doors. It is loud, but sounds awesome. 2 very small surface rust spots. Runs and drives perfect. Straight down the highway. Color is kind of an OD green. I hate to sell it. This is the second time I have owned the jeep, had it in high school, sold it when I went to college. Bought it back 3 yrs ago. Now, need to take care of some things finacially, and unfortunately, the Jeep has to go. The previous owner did all the work. Overall in wonderful condition.

Buyer is responsible for shipping. Payment to be received within 5 days of sale.